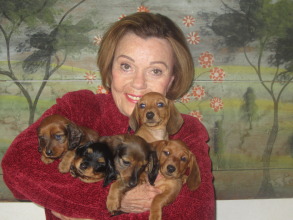 When Valerie Diker’s parents gave away her first dachshund, suspecting little Valerie was allergic, that seemed like it for Diker and “hot dogs.” Hardly. She has bred 106 dachshunds over the last 20 years, and taken home countless blue ribbons, including the highly prized Westminster Best of Breed. Valerie’s NY-based kennel is appropriately named Dikerdachs.

Diker caught the breeding bug once her children left the nest. After meeting with the “granddam” of dachshund breeding, Dee Hutchinson, and purchasing her first show dog, Val decided this was it for her. Despite his lack of enthusiasm for dogs, Diker’s husband supported her new passion, even as the number of dachshunds scampering around their home skyrocketed. “He doesn’t exactly understand it … but, over all these years, I’ve managed to train him to just not pay any attention to them,” Diker says. “I’ll tell him I have a certain number, and that’s what he likes to know, and sometimes the number isn’t totally accurate. But we make it work.”

Two of Diker’s dachs have taken “Best of Breed” at the Westminster Kennel Club: Richard in 2007 and Jessie in 2009. Diker has covered an entire wall of her kennel with ribbons and bronze plaques her dogs have earned over the years.  She holds her champs to high standards even after their showing days are over, no couch potatoes for her,  she plans to train each of her dachshunds to become therapy dogs for children and the elderly upon retirement.

According to Diker, one of the essentials of dachshund care is exercise. She makes sure all her dogs get 2.5 miles each day to keep them lean and healthy. “I think it’s very important that dachshunds not be allowed to get fat,” Diker says. “They have a very long back; and if they have a big tummy, and it pulls down on their back, there’s going to be a problem. So perhaps more than any other breed, dachshunds should be watched carefully.” Not only are they forbidden to jump onto couches and beds, they are not allowed to go up and down stairs.  Not one of Dikers many dogs has fallen prey to frequent dachshund back problems.

Diker’s typical day with her dogs (she currently has six grown dachshunds and five puppies) starts at 8:30 am. Since she paper trains her pups, she first cleans up their room. She feeds each dog its special, individualized breakfast and then it’s play time. After taking the bigger dogs outside for their lengthy walk, Diker lets the gang take a leisurely afternoon nap before taking them out again. She often grooms them in the evening.

When not caring for her dachshunds, Diker lends her hand to a few canine charities. She has built “Val’s Puppy Care Center” for  Best Friends Animal Sanctuary, an enormous no kill shelter located in Kanab, Utah. The sanctuary runs a project called Pup My Ride, which rescues dogs from puppy mills and provides them with new “homes” at shelters. Diker and the other volunteers receive each of 180 puppy mill rescues from an 18-wheeler truck and help transport them to their new shelter. Diker is proud to support an initiative to correct some of the mistreatment mills inflict on these dogs, who have often never even felt a blade of grass. “I find this to be one of the most gratifying experiences because the helpers and  the professionals inside the truck, are so excited for these dogs,” she says. “They’re so involved in what they’re doing, that we get involved right along with them. It’s just a love fest between these poor little puppy mill dogs and the grown ups who love them, even though they don’t know anything about them.”

If you’re interested in having one of this dog lover’s puppies, you can check out her latest brood at dikerdachs.com. Provided you’re just as passionate about dachshunds as Diker, she’ll gladly set you up with a tiny, impeccably-bred, little longhaired best friend.