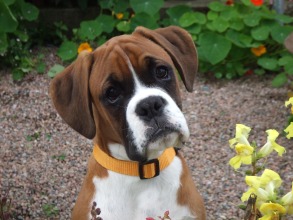 With apologies to Molière, I am something of a misanthrope. I like dogs better than people. Why else would you I experience an irresistible compulsion to stop every dog I meet on the street for a mini lovefest? And what else would explain the way my heart swells to bursting when I hold a puppy close? Put a human baby in my arms and the only feeling evoked will be the fervent hope he doesn’t spit up on me. Perhaps I was a dog in a previous life. That might account for the strong connection I feel with my own two boxers, Paige and Brooke. We never have a communication gap; I always understand what they want me to know. Their happiness is paramount, and I spoil them rotten. “Man, I sure feel bad for your husband”, says a cynical acquaintance. “Don’t” I assure him. “He sleeps in the bed with us.” Boxers typically are high-energy dogs who love to run, jump, and roughhouse, and I’ve always tried to gear playtime to their fulfillment rather than my own. The only heeling performed on walks is when I can keep up with them. After all, what fun is a walk if you can’t use an extendable leash to trot ahead a few paces and leave a calling card at every bush? Suffice it to say that I try to think like a dog. What would they enjoy doing inside as the weather turns nippy? With a little canine ingenuity, I came up with several ideas that combine the best of both our worlds. The first thing that came to mind was wrestling. Paige and Brooke are frequent sparring partners, and I’ve watched them do it often enough. So one day I dropped on all fours and pitched right in. Stubby tails began wagging furiously. “Yay! Mom wants to get rowdy!” I playfully bit at their necks; they nibbled on my ears. I spit fur out of my mouth; they tried French-kiss me. I caught them a scissor-leg hold, they grabbed my pant leg and pulled me off balance. Who won? They don’t call them Boxers for nothing! Okay. It’s been said that playing tug-of-war can encourage your dog to challenge your authority. I have never found this to be a problem. From day one, it was clear who ruled this roost: the dogs. Once that is established, tug-of-war with a sturdy dog rope becomes a good isometric workout for canines and humans alike (a good rationalization for days when you don’t go to the gym). No contest, you think? Think again! Those muscular back legs pack lots of leverage, and holding onto the rope as Paige shook her head violently from side to side became my quest. As I did not want the dubious distinction of having the first dogs in history to the undergo orthodontia, I didn’t play this game until all puppy teeth were replaced by their adult counterparts. Dogs love to chase anything that moves, and I have found that remote control toy cars are always a pack pleaser. My dogs seem to love the challenge of keeping up with abrupt direction changes on a slick floor that can stand up the abuse. Don’t own a toy car? Just ask little Billy next door to come over with his… and be prepared to replace it if it’s totaled! Soccer is a great energy-burner that you can bring indoors with a Nerf ball and a large basement. Team up with or against your dogs. If you decide to play humans against dogs, be warned – they can do a few things you can’t, like pick up the ball in their mouth, run really fast, and play great defense (body blocks mean nothing to them). Conversely, we bipeds have a few advantages of our own: we can be our own referees, we’re much better at passing the ball, and since dogs use their mouths, we can use our hands. Hey, it’s our game, our rules! Putting ourselves on a dog’s level takes some special traits. We must put aside self-centeredness and hubris and replace them with loyalty and trust. And you know what? Friendliness is next to dogliness!