In the United States, around 25 percent of domesticated cats are declawed. Declawing is considered mutilation in many countries, because it basically consists in amputation the last joint of the cat’s paw, along with the claw. Consider how this might feel on your own hands: having the nub of each of your fingers cut off would summon one of the most excruciating pains imaginable.

Despite the physical and behavioral harm inflicted on cats who are declawed, many veterinarians continue to recommend the procedure, which costs upwards of $1,200. per hour — even for very young kittens.

A declawed cat faces a number of potential risks, the first of which being infection.  Declawing surgery is not a sterile surgery, and thus puts cats in immediate risk of infection, which can be incredibly harmful, if not fatal.  Futhermore, it can result in permanent lameness, pain and arthritis.  These are torturous experiences for a cat. 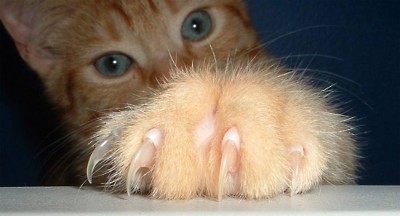 Declawing can lead to extreme behavioral problems for cats. Removing their claws deprives them from their primary source of defense, and cats can develop aggressive behavior because they feel threatened and defenseless. The pain caused by the lack of this last joint can cause cats to refuse to use in the litter box because the litter hurts their maimed paws.

The Paw Project, founded by Dr. Conrad, is an organization whose mission is to educate the public about the painful and crippling effects of feline declawing, to promote animal welfare through the abolition of the practice of declaw surgery and to rehabilitate cats that have been declawed.

The Paw Project advocates for domesticated cats as well as bigger felines. Indeed, a lot of people who want to keep big cats such as lions and tigers declaw them, believing that they will be protected against injuries. But big cats often prove to be poor pets, weighing hundreds of pounds and eating enormous quantity of food, and because of that are often neglected, and then abandoned or confiscated by animal regulatory offices, only to end up in compounds or sanctuaries.

The Paw Project actively advocates campaigns to legally ban declawing and in 2002, Dr. Conrad approached West Hollywood City Council members and convinced them that declawing of all animals should be banned. The council adopted an anti-declawing ordinance soon after (April, 2003) and became the first city in all of North America to ban declawing.

In September 2013, The Paw Project will release a documentary, written and directed by Dr. Conrad, about the inspiring David and Goliath story of a grassroots movement to protect large and small felines, from the cruelty of declawing and how the movement has prevailed, despite the efforts of well-funded professional veterinary associations. The documentary will be in theaters in New York City, Los Angeles and Chicago, and afterward, it will be run on VOD. 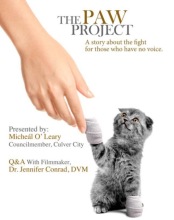 Animal Fair met with Dr. Conrad, founder of The Paw Project, and asked what inspired her to fight against declawing.

Animal Fair: Dr. Conrad, thank you so much for talking to us today! Obviously, we want to what know about the origins of such an inspiring project. Was there a cat in particular that inspired you?

Dr. Conrad: The cat who inspired me the most to ban declawing was named Kona. He was a mountain lion who was declawed and crippled. When we fixed his paws, he could walk again, and it was then that I knew I had to stop this horrific practice. The other feline who inspired me was a domestic cat was named Sweet Anne Page. She was a tiny Tortie who was declawed and slated for death because she wasn’t using the litter box. When she was rescued, she was the most vulnerable and timid cat, but also full of love and sweetness.

AF: That’s incredible! So, were you always inspired to help animals so passionately, or was your passion mainly spurred by these two felines?

DC: I went to vet school thinking that we would be there to protect animals and ensure that their quality of life was better because they had veterinary care — animals have always been my passion. I just felt that exposing this incredible injustice will help animals. That is why it is my passion.

AF: Now, let’s talk about the actual declawing procedure. Obviously, a lot of people feel the need to declaw their pets. How much does a declawing procedure actually cost, and what do the different costs mean  for the care of the feline?

AF: Wow, so it varies incredibly in cost and care. So, if I were an educated pet owner trying to support the ban on declawing, how would I go about doing that? Should I lobby my state and federal government, or is there a better way?

DC: People can support this by educating other people. United, we will win this war. If every one of us tells five people and our veterinarian to stop declawing and why, the word will spread. And when legislation to ban it is being considered, everyone has to write letters in support.

AF: Absolutely. Together we have to end this inhumane process. To end on a happier note, do you have any loving pets at home or does your passionate and inspiring work keep you too busy?

DC: I have five cats and one dog currently. Three of my five cats are former ferals from under a hotel in Palm Springs. I’ve named them Seabiscuit Conrad — who, by the way, has over 3500 friends on Facebook – Imparella and Bug. The two others, Julius and Macduff, are cats that were left on a spay/neuter truck I used to help run. And finally, my perfect dog Happiroo is from a county shelter where she was left after a friend of mine adopted all three of her cage mates. I got her when I found out that she was left to die.

It’s time to end declawing once and for all. This invasive, painful and inhumane procedure leaves our precious felines prey to countless dangers. Wendy Diamond, entrepreneur and the premiere pet-lifestyle expert, is partnering up with The Paw Project by putting together a fund to raise money and awareness to prevent declawing cats. Named “The Pasha Fund” after Wendy Diamond’s feline partner, Pasha, its mission is to educate pet owners about the morbid dangers declawing presents and to promote a legal ban on declawing cats at the state level. Count your toes and be thankful, then go out and educate people about the dangers of declawing today!  And remember, mark your calendar, and don’t miss the release of The Paw Project Movie in your theaters next September!