I think we can all agree that animal protection laws are extremely important for the safety of animals all over the country. The Animal Legal Defense Fund is an organization that has been protecting the lives animals through the legal system since 1979! Along with helping to create better laws for animals, the organization helps keep the public updated on laws and petitions. Recently, the RLDF released a list of crazy laws from 2013.

Here is a list of insane laws around the country that will definitely make you laugh or, at the very least, make you scratch your head. Try to imagine each one and you’ll see how completely ridiculous they all are.

Would you ever consider sitting with a Lion in the movie theater? 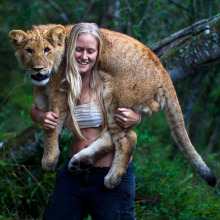 1.      In Alaska it is against the law to push a live moose out of an airplane mid-flight.

2.     In Arizona, you aren’t allowed to let your donkey sleep in the bathtub (horses can’t be kept in bathtubs in South Carolina, just fyi).

3.      In California, animals can’t mate within 500 yards of a church or school (Just how is this law observed, enforced, and punished?)

4.      Colorado folk must have some strange habits, because it is illegal to drink and ride a horse.

5.      Here’s one that’s animal friendly: in Connecticut dogs with tattoos must be reported to the authorities.

6.      In Georgia, people can no longer give away goldfish at Bingo contests.

9.      Maryland movie theaters do NOT allow people to bring lions.

What do you think is the most ridiculous law? And why were some of these even created? Where people really ever trying to hunt whales in Nebraska? And who in their right mind would tattoo their dog? These laws are pretty crazy and it made me want to research to find other crazy laws. I found out that in Indiana, it is illegal to pass a horse on the street. And in Louisiana if you steal an alligator you can got to jail for 10 years! Plus, in Wyoming you cannot take a picture of a rabbit from January to April without a permit. (I am sure the Wyoming police is checking Instagram to find these crooks.)

Perhaps, the animal lawmakers got bored and tried to add some humor to their jobs while creating the laws, because some of these do not make any sense! Either way, any animal safety law is good in my opinion. And although some are downright silly, other laws are really important. Some laws are actually making a huge difference thanks to the ALDF organization. Make sure to check out the Animal Legal Defense Fund and go to http://aldf.org to take action and even improve animal state laws. I even signed up to stop the horse and carriage rides in NYC and you can, too.