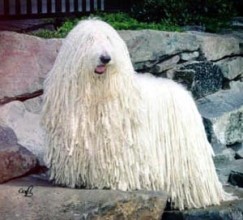 Once upon a time – we’re talking centuries ago – Chinese tribes fleeing the Mongol invasion migrated to the area that became Hungary. Today’s historians weren’t there at the time, but we’ll take their word for it.

What does this have to do with my sheepdog, Molly? A lot it turns out. These nomadic tribes – called Cumans – bred a variety of dog that served as a livestock guardian.

What distinguishes the dog that descended from the Cuman’s genetic tinkering – the Komondor – is its white “corded” coat, forming mats, which are like dreadlocks.

The process is called “cording.” If the mats are not separated, they’ll form a hard outer shell of hair that will leave the dog looking like an armadillo. And everybody knows armadillos make poor livestock guardians.

They’ve got enough on their minds just trying to cross the road without getting run over.

Komondorok – that’s the plural – were designed to look like the sheep they guard on Hungary’s plain, the Puszta. From a distance, predators can’t distinguish the guard dog from its charges. And the coat adds protection from the elements as well as from attackers.

Fast-forward to the year 2000. Instead of protecting a flock of livestock from coyotes, my three-year-old Komondor, protects my wife and me from ironing boards and pregnant women on New York streets. She’s that good.

We go for a lot of walks. After all, a dog isn’t so much man’s best friend as man’s second bladder.

One comment I hear on a daily basis is: “That’s a Rasta dog.” I’m flattered people think enough of Molly’s mental capacity – she is bright – to call her a Rastafarian. After all, Rastafarians hold a fascinating belief in the divinity of the deceased Ethiopian Emperor Haile Selassie. They adhere to many of the Old Testament Judaic laws, particularly one biblical injunction against cutting their hair.

Now looking at Molly, lying on the floor beside a Winnie-the-Pooh hand puppet I bought for her at Toys R Us, I know she can’t possibly worship and Ethiopian king as God.

That’s because she thinks I’m God.

People also ask me if I braid Molly’s hair. That’s embarrassing. I tell them a team of Dominican hairdressers do it for me. “Ha ha,” they chuckle, backing away slowly, clutching their children and purses.

Strangers that pass each other silently on the street, I’ve found, will say unflattering things about other people’s dogs. One day a woman stopped my wife, “You are so evil,” she said, scowling at Molly. “Why would you do that to a dog?” My wife said the woman was “wrinkled prune lady.” I asked her to clarify. “Like one of those prune dolls on corn husks,” she said. “You know, one of those corns dolls with prune heads. When I still wasn’t getting it, she said, “Like the Wicked Witch in the Wizard of Oz.”

Boy, my wife’s a real meany.

I hear a lot of comments from people after Molly and I pass them on the sidewalk. That’s the worst-people who talk behind my dog’s back. “That dog is out of control,” said a girl in jeans and a T-shirt to her friend on 110th Street. “What is that, a poodle?” asked one man. “God I hope not,” tweedy-looking gentleman said in Masterpiece Theater English, “That dog looks like a distant relative of Genghis Khan.”

I’ll admit, it’s not all bad. The other day, while Molly and I were bouncing along in the park, an adorable Japanese woman came up to us. She kneeled in the grass and hugged Molly, laughing while rubbing noses with her.

I remember thinking: Damn, where was this dog when I was single?

So to any bachelors out there, I offer this age-old wisdom: Forget wine and roses. Just get a dog like mine. Women will fall at your feet. But as far as annoying comments from the sidewalk’s peanut gallery, you’re on your own.