Pet waste,includes bacteria, viruses, and parasites, as well as undigested material. Besides human aesthetics, disease control is an important reason to pick up the waste. Most pets are fastidious about waste. Their natural inclination is to deposit their waste at a regular time and place, and cover or otherwise ritualize their elimination. They want to eliminate in clean, fresh smelling areas. When waste builds up in a litter box, yard, or sidewalk, the pet begins to look for unsoiled places to eliminate. This leads to the number one reason cats lose their homes– inappropriate elimination. Usually, this problem can be corrected with improved litter box maintenance.

Given the fact that a pooper-scooper is not a hot fashion accessory (and frankly, how do you clean that utensil to take it back into your apartment?), the best way to pick up after dogs is with a poop bag or newspaper. Some parks provide special containers for pet waste. Other cities expect us to take the waste home and dispose of it there. Studies show that only 40 percent of us pick up after our dogs. If newspaper is not workable, consider a compostable bag. Bags include everything from the free bags you get at the grocery store or with your newspaper to bags that are 100 percent biodegradable and chemically degradable. For dogs, bagging waste is good, biodegradable waste bags are better, compostable bags or newspaper are next, and bagless flushing is best. For cats, the same order of preference applies, but skip the flushing. (because of a fairly common organism that wastewater treatment plants are not equipped to remove.

A few cities are beginning to recycle organic waste (including pet waste), and use a digester to create compost. Now that’s sustainable.

The United States Environmental Protection Agency (EPA) estimates that dogs evacuate 0.75 pounds of feces per day, or 5.25 pounds per week. One dog creates approximately 273 pounds of feces per year. That’s the amount you’ll be picking up if you have one average-sized dog.  Our 74 million dogs produce 10 million tons of feces nationwide, annually. (Not surprisingly, cats would not give estimates to the EPA, so their contribution is left to the imagination.) Ten million tons—that’s enough waste to cover 1,100 football fields, including the end zones, to a depth of 5 feet.  That’s some fertilizer! 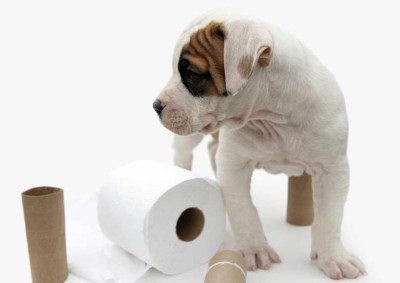