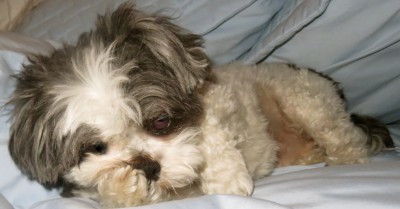 While napping varies from dog to dog and depends on things such as age and personality, most dogs sleep an average of 13 to 14 hours per day. How much and when they sleep depends on the social and physical environment. An apartment or house dog will sleep much more than a working dog such as those who herd sheep or perform search and rescue duties. Some of the very large breeds of dogs like Newfoundlands, Saint Bernards or Mastiffs can sleep 16 to 18 hours a day. These dogs are often referred to as “mat dogs” because they can usually be found lying in front of a fireplace like a giant furry mat! Although dogs sleep more than us, they usually wake more frequently than we do. In his book, Dog Behavior, Ian Dunbar, Ph.D., MRCVS states, “Almost from a dead sleep, the dog can respond with a flurry of activity to relevant cues such as the sound of the doorbell, the change in odor as someone opens the refrigerator door, or the sense of a dog passing by outside.” Dogs are able to adjust their sleep pattern so that they can be awake when there is actually something to do and remain asleep the rest of the time. However, some dogs will sleep out of boredom so providing plenty of stimulation during the day will help set a routine of keeping him awake when the sun is up and asleep at night.

I DREAMED I WAS THE ALPHA DOG

They say when we dream about animals, it symbolizes our animal instincts. Does that mean when dogs dream about us it symbolizes their human ones? We may never know the details of doggie dreams, but they do exist according to scientific research. We’re 95% identical genetically and physicall; so much of our brains, neurochemistry, reflexes and memory are “wired” in a similar manner. Like humans, dogs have two main types of sleep: rapid eye movement (REM) sleep and slow wave sleep (SWS). In both cases, our brains are doing a bit of “house cleaning” – processing memory and sorting out all of the messages that have bombarded us during the day. When your dog goes to sleep, he enters the slow wave or quiet phase of sleep. His breathing slows, blood pressure and body temperature drop and heart rate decreases. After about ten minutes, your dog enters the REM or active stage of sleep. He rolls his eyes under his closed lids, he may bark, whine (even snore!) or jerk and twitch his legs. Adult dogs spend about 10-12% of their sleeping time in REM sleep while puppies (like human babies) spend a much greater proportion of time in REM sleep, because they are compacting huge quantities of newly acquired data. Even though it is tempting to wake your dog when he seems to be having a “bad” dream, veterinarians suggest not to, because dreaming is natural, normal and necessary for dogs, just as it is for humans. While we may yawn when we’re bored or our brains need a little extra oxygen, dogs do so when they are nervous or prevented from doing something they want to do. By falling asleep, animals can cope with stress by avoiding it. (If only I could do that the next time I have a tight deadline at work!) 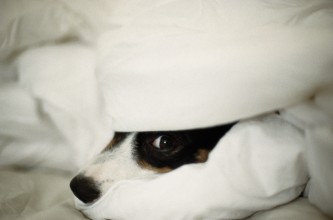 While we’re on the subject of falling asleep, did you know that some dogs are subject to narcolepsy? After years of research, scientists have discovered that a narcolepsy gene exists in four breeds of dogs: Dobermans, Labradors, Dachshunds and Poodles. While this disorder only seems to effect those specific breeds, the discovery is a major breakthrough and will be invaluable in helping to shed light on narcolepsy in humans while furthering research on how and why we sleep. Narcolepsy is a condition that is characterized by brief attacks of deep sleep. Some of the symptoms include extreme daytime sleepiness, sleep paralysis – a frightening inability to move shortly after awakening or shortly after dozing off – as well as vivid auditory or visual hallucinations while asleep or while falling asleep. The most dramatic symptom is cataplexy, a sudden episode of muscle weakness that is often triggered by strong emotions such as joy, anger or surprise. In a dog this could be the sight of a snack or the emotion of playing together. The attacks only last a few seconds but can occur up to hundreds of times a day. According to Emmanuel Mignot, MD Ph.D., “Dogs experiencing cataleptic attacks are not asleep. They are awake, but momentarily paralyzed. Their eyes are open and they can move them, but their postural muscles are completely relaxed.” While there are current treatments to alleviate the symptoms of narcolepsy, scientists are hoping that by studying this gene in dogs, they can design better drugs to combat it altogether.  Another sleeping disorder can have the opposite affect. Although it is extremely rare, a recent case at the University of Florida’s Veterinary Medical Teaching Hospital was found in a Golden Retriever named Dreyfus, who experienced violent, thrashing movements while he slept. The owners said it was so bad that the dog often knocked over furniture while he slept and woke up the entire family. After much testing, the veterinarians diagnosed the dog’s problem as a rare case of rapid eye movement behavior disorder. It occurs when the normal paralysis that happens to our major muscles while we sleep never takes hold, which leads to high-action slumber. In humans, this disorder can literally propel them out of bed or injure their sleeping partners. Something to consider the next time you share your bed with man, woman or even dog! Which brings us to . . . 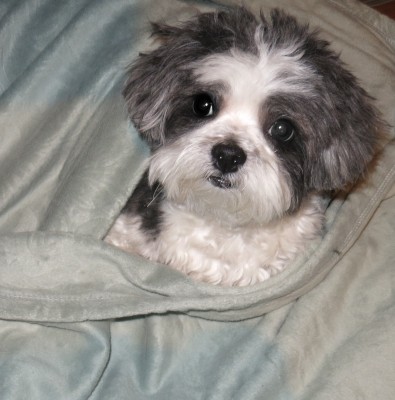 Do you like to have a special type of sheet or arrange your pillows in a certain way before you go to bed? Well dogs can be just as fussy, often circling or pawing at their sleeping place in order to make a comfortable, den-like depression in which to sleep. They may seek out a sheltered place in your home such as inside a closet, underneath a table, or even try to join you in your bed. According to a marketing survey by the American Pet Products Manufacturing Association, 41% of dog owners share their bed with their dogs, up from 34% only four years ago. There are two schools of thought when it comes to sharing the bed with your pooch. Advocates of this behavior say that it strengthens the human-canine bond and mimics the naturalistic setting where the pack rests together as a group. Plus many owners like to snuggle with their dog and some say the simple act of allowing the dog onto your bed can affirm your position as the pack leader since you are the one granting permission. Opponents, however, state that it delivers the wrong message. Before dogs were domesticated, the alpha dog would always choose a sleeping ground that was higher than the rest of the pack. By letting your dog rest on a higher level, and in the same place that you do, you may be communicating to him that he is your equal and not a lesser member of the pack, which can sometimes lead to problems with behavior and dominance. It seems as bipartisan as a presidential election, but whichever side you’re on, this is one issue that is strictly between you and your dog! 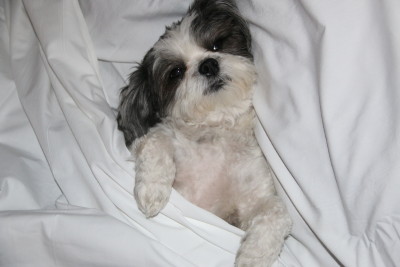 If you give your dog a comfy place to rest, plenty of love and affection and a healthy amount of activity, he’s sure to get a great night (and morning, and afternoon) of sleep. And if that doesn’t work, you can always try reading a bedtime story and a warm glass of milk! Sweet dreams little doggie! 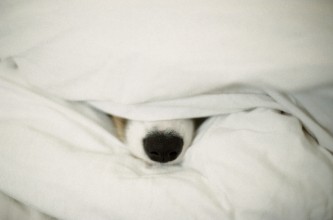