Oceanside Santa Barbara is a California city with a unique climate compared to all other cities in the United States. Santa Barbara has been donned the exotic title, “American Riviera,” because its climate resembles that of the tropical regions surrounding the Mediterranean Sea, which makes the region ideal for wine making. But Santa Barbara’s wine is not the only attraction that draws countless tourists year-round. With over 70,000 dogs for the roughly 200,000 residents, Santa Barbara is about as pet-friendly as a city can get.

Finding the right lodging in Santa Barbara may be difficult due to the expansive variety of lodgings, many of which welcome pets. Downtown’s Andalucia (andaluciasb.com) is just one option for the pet accustomed to being pampered. The hotel manager at the Andalucia is quite privy to accommodating the lifestyle of lavish animals. “We treat every guest like royalty and all pets as royalty as well. We know how much pet parents are attached to their pets and we just want to be sure that they are well taken care of.” The Andalucia’s downtown location is walking distance to everything in town, including Santa Barbara’s many beaches.

If your pet is more adventurous and enjoys serenity while on vacation, then the San Ysidro Ranch (sanysidroranch.com) should be your top choice for lodging. San Ysidro has been donned the “Most Romantic Destination in the World” and is owned by Beanie Baby founder Ty Warner. The century-old ranch was the setting of Vivien Leigh and Sir Laurence Oliver’s wedding and also hosted the honeymoon of John and Jackie Kennedy. San Ysidro is made up of 41 private cottages secluded in the foothills of the Santa Ynez Mountains, where beautiful sights are bountiful.

With a small fee of $100, guests are welcome to bring their dog, cat or birds to any of the cottages on the ranch, but don’t think that your pet is just along for the ride. The staff at San Ysidro welcomes pets to the cottages with “a custom-logo bed for use during their stay, plus water, a healthy treat created by our own pastry chef and a Ty® Bow-Wow Beanies chew toy.” All pets are allowed on the 17 miles of walking trails, and the ranch will even supply you with a dog to walk with if you didn’t bring your own. Need some relaxation time after a day of breathtaking sights, beautiful gardens and exhilarating views of the Pacific ocean? Both you and your pet can get in-house massages from the staff. The San Ysidro Ranch is the perfect fit for the adventurer, romantic, lover of nature, and their pet. “We realize that for many of our guests, their pets are a member of their family” says Tamara Fangman, Director of Sales and Marketing at the ranch.

If you don’t have a pet companion traveling with you, not to worry, on the San Ysidro trail you’ll find friendly dogs that belong to the guest cottages on the property and nearby private homes. During Animal Fair’s stay at the ranch, we met up with a local canine named Sage, who resided at a house located at the base of the trail. Sage became our unofficial, self-appointed trail guide and walked us through the winding and beautiful San Ysidro trail with great finesse as only a true canine can. Vacationing at San Ysidro is a writers dream retreat with the sound of the creek, the hot steamy Jacuzzi, and the smell of the willow trees. We dined on the most scrumptious food including portobello raviolis prepared with broccoli rabe and tomatoes – a must taste while visiting here!

Other hotels in the Santa Barbara area offering pet lodging include the Double Tree Resort (fpdtr.com), owned by former actor Fess Parker, known for his Disney portrayals of Daniel Boone and Davy Crockett. The Casa Del Mar Inn (casadelmar.com), Harbor House Inn (harborhouseinn.com) and the Four Seasons Biltmore (fourseasons.com/baltimore) also welcome pets and are all located near Santa Barbara’s many parks and beaches. Dogs in Santa Barbara must be leashed while on beaches during the summer, but off-season dogs are permitted to be unleashed. Many beach areas know that the sandy shores are hot spots for canine pedestrians and local beach flea markets such as the one on Cabrillo Beach Boulevard that sell handmade pet gifts and accessories. If you’re looking for an area for your pet to play in the wilderness, stop by the Douglas Family Preserve, a leash-free park that allows social dogs to meet and greet and also boasts stunning sights for the parent. Other dog-friendly parks that welcome dogs include Chase Palm Park (santabarbaraca.gov/parks) and Oak Park (santabarbaraca.gov/parks).

While spending time in Santa Barbara with your pet, there are many places you can take your pooch for some five star pampering. Dioji, (Dioji.com) a “K9 Resort and Athletic Club” understands the five star approach. Dioji (pronounced D-O-G) excites visitors with their bone-shaped pool in the front of their establishment and entices them in with their massage therapy, wellness packages, day care, overnight cage-free boarding and spa treatments. Dioji’s co-owner Jeannie Wendel told Animal Fair “what we’re creating here is a place where we would want to come and receive the high quality treatments that we would expect for ourselves and our dog. It’s what we found lacking in the other places we visited and we’re going above and beyond here. Hospitality and customer service are our number one goals along with caring for these furry pals.” To help further their mission Wendel put her own pup, Kirby, in the important position of Vice President of Quality Control.

Once your pet has cooled off in the bone-shaped Dioji pool, you can take them to OffLeash (OffLeashStyle.com), an exceptional pet shop that offers “unique, ultra-chic pet apparel, accessories, organic food, and treats.” OffLeash is “where pets meet style” according to owners Laurie and Don Frick. The Fricks opened OffLeash after Laurie had spent four days in Queens, New York looking for a Whippet who ran away from the airport after the Westminster Dog Show. “I followed the story of a missing Whippet a couple years ago and being a Whippet owner myself, I felt that I really should be working around animals. We don’t have children our pets are our children.” The rest is history, and today OffLeash is redefining canine style and a definite doggie to-do on your list while in Santa Barbara.

Most animal lovers love zoos, but dogs are not usually welcomed. So if you find that you want to go out and your dog would rather stay in and nap, then take a trip to the Santa Barbara Zoo (santabarbarazoo.org) to see over 500 animals. The Santa Barbara Zoo houses over 180 species of animals, including endangered species of fox that come from the Channel Islands. While visiting the Santa Barbara Zoo last year, zookeeper Sherry introduced Animal Fair to the zoo’s 21-year-old giraffe named Gemina who is famous for her crooked neck. “Lots of people came to the zoo asking for the crooked neck giraffe. Sadly, Gemina was “humanely euthanized” recently because her health was dwindling and she had stopped eating. Sherry reminisces, “She was here since she was two, and at that time she didn’t have a crooked neck and it got more and more crooked over time. But she did really well with it, and she had babies like normal, ate and related to other members just like any other giraffe would.” Gemina even received the most votes for a contest searching for the Seven Wonders of Santa Barbara. A memorial fund has been set up in Gemina’s honor to directly help giraffes at ?the zoo.

Santa Barbara is well-known for its pet population and wine, one essential stop for the Santa Barabara pet loving tourist is the Carivintвs Winery, home of the Dog Lover’s Wine Club (dogloverswineclub.com). Co-founder Fleet Hamilton started the club to help local and national canine charities while making a living. “We can make a living, provide something that’s really great, wine, and we can give back to the shelters by providing them some income so they can take care of the animals.” Since the Club’s start, profits from wine sales have gone to support the Humane Society of the United States, the Orange County German Sheppard Rescue, and both the New Orleans and Los Angeles ASPCA. In terms of vineyard location, Carivintвs Winery is prime location. “The climate here is very similar to a lot of places in Europe. Santa Barbara county itself grows a lot of really good Chardonnays and Pinot Noirs. The climate here is perfect for Pinot Noir, it’s cool in the evenings and it’s warm for the day, so it produces the perfect wine,” Hamilton told Animal Fair.

As part of their continued efforts to reach out to the pet world, the Dog Lovers Wine Club reveals a new beautiful new label each month, designed by the Club’s other co-founder, Matt Hahn. Hahn’s nom-de-plume is Poocher Fetch, and the artist takes from photos and stories sent in by members across the country, and adapt them into elegant graphic designs for the bottles. The founders know that both the bottle design and the wine itself makes a delicious treat and a sensational gift for pet lovers everywhere.

Santa Barbara certainly is the place for dogs to see and be seen. With attractions that cater to both the owner and the pet, it stands out as a pet-friendly metropolis … just make sure your pet stays away from the wine !

For the Best the Pet Lifestyle especially pet travel has to offer follow Wendy and Lucky Diamond on Facebook,Twitter, and right here at AnimalFair.com!

It’s a Frog! Nope, That’s the Sound of the Keel-billed Toucan of Belize! 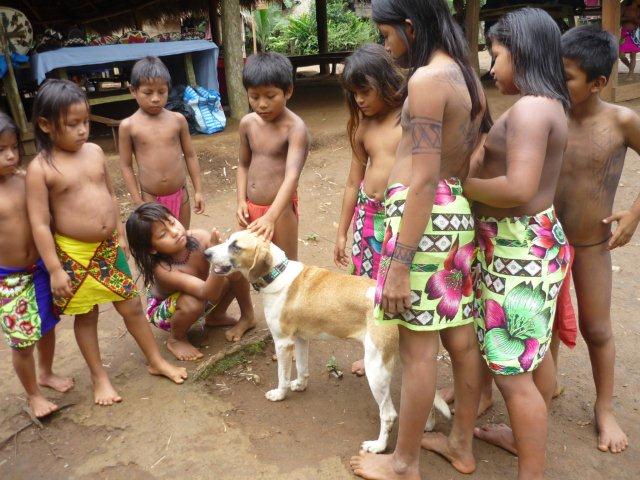 Monkeying around with the natives in Panama!