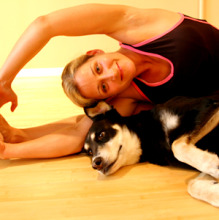 From ambulance sirens to summer thunderstorms, a pet’s life can be stressful. But if anything is certain, owners will stop at nothing to make their furry friends’ life drama-free, and these days, more and more pet parents are trying holistic approaches. There’s doga (that’d be yoga with your dog), acupuncture and now, the newest Zen-like pet product to hit NYC, herbal tea.

With flavor offerings such as Quiet Tea and Easy Peesy, The Honest Kitchen’s new line of loose-leaf teas for dogs and cats ($11 to $12 each at various independent dog stores in the city) prove that “tea for two” isn’t just for humans anymore.

Quiet Tea, which is made from human-grade oat straw, chamomile, passion flower and other herbs, is designed to combat separation anxiety and anxiousness when traveling. While Easy Peesy contains human-grade horsetail and marshmallow root among other things, which aims to help support a healthy, functioning bladder.

The teas are meant to be prepared similarly to loose-leaf human teas, says Laurette Lamontagne, The Honest Kitchen’s resident herbalist: “Owners measure the recommended quantity of herbs, steep in hot water for five to 10 minutes and strain if desired.”

They can be served solo in the water dish or added to foods as a hydrating element.

Lucy Postins, founder of The Honest Kitchen, adds, “The teas are designed to promote optimal health in dogs and cats.”

Owners who mimic their dog’s natural stretches during the human practice of yoga, which features poses such as downward and upward dog, know a thing or two about promoting optimal health. In fact, for a few years now, yogis have begun stretching out on mats with their pooches by their side in a combined exercise called doga. Suzi Teitelman, founder of Doga at Crunch Fitness, explains its benefits: “More than just taking your dog for a walk, you’re becoming one with your dog.” 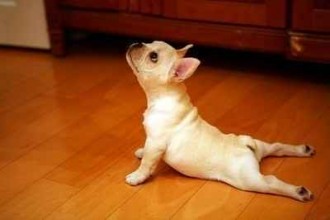 And while it may sound a bit, well, exotic, doga may be closer at hand than the nearest dog park: Aside from the multi-location fitness chain, East Yoga holds doga classes right at the Bideawee shelter on East 38th Street.

But holistic pet treatments go beyond preventative methods, and Carol Hughes, owner of a rescued greyhound, knows this firsthand. Hughes’ quirkily named dog Not had difficulty walking from a prior life as a forced racing hound. After years moving slowly and painfully, she took her to see Dr. Babette Gladstein, a vet who specializes in acupuncture treatment for dogs.

“Besides relieving pain and muscle spasms in dogs, [acupuncture] stimulates their nerves and defense system, and provides numerous other health benefits,” says Gladstein, who has noticed marked improvement in Not’s condition since performing acupuncture on her. Luckily for Hughes, the harmonious balance she shares with Not has also increased — even if it cost her: Acupuncture is $300 a session and best administered once every two weeks until improvement is seen.

Although doga, acupuncture and even tea may seem excessive to some, the principles behind holistic remedies for dogs are as popular as daytime TV. Ellen DeGeneres, an avid yogi and pet owner herself, is also a co-owner of Halo, a 25-year-old holistic pet-care company. She summed up the Zen movement recently: “If you’re going to have pets, you should treat them like you’d treat yourself.”

If you don’t live in New York order online Doga is now on DVD!

For the Best the Pet Lifestyle and animal welfare has to offer follow Wendy  Diamond on Facebook,Twitter, and right here at AnimalFair.com!