Mark your calendars! March 3rd is dedicated to the wildlife of the world. It is (appropriately titled) World Wildlife Day! Taking a trip to the zoo seems like like a sufficient celebration, but the holiday is actually for bringing attention to the endangered species of the world.

More specifically, apes are in need of help. Bonobos, like Chimpanzees, are the closest relatives to humans. We share up to 98% of our genome. Surprisingly, they’re closer to us, genetically speaking, than to gorillas, even if they’re physically more similar. Bonobos are famous for tolerant female relationships and non-reproductive sexual behavior between partners of all ages and sexes.

Who are the bonobos?

They can be found in the Congo Basin, the second largest rainforest in the world, in the Democratic Republic of the Congo. Fruit make up half of their diet; the other half is composed of vegetation and occasionally insects, larvae, earthworms, eggs, and even small mammals.

Bonobos live in large matriarchal communities, where female form tight bonds against males. This is heaven on Earth for feminists! Bonobo females seem to know that strong solidarity keeps the males from being dominant.

Bonobos can be confused with Chimpanzees, as they are very alike in the eyes of non-specialists. Bonobos and Chimps separated around 1.5 million years ago, when they took different ways, on each side of the Congo River. Bonobos are slender, have pink lips and black faces. Chimps, however, are robust, with black lips, and their face color changes with age. Plus, they’re composed of 3 subspecies found across Africa while bonobos are only found in the Congo basin.

Bonobos are classified as endangered on the IUCN Red List, facing a very high risk of extinction in the near future. Around 10.000 Bonobos remain in the wild, but since they live in a very wild area, only accessible by boat of plane, it’s difficult to go and count them.

In the Congo, there is little agriculture, so the local population relies on the wildlife to get meat. Bonobos are easily hunted because they live in communities; you find one, you find the whole group. Because Bonobos only have babies every 4 to 5 years, they’re very slow to regenerate. It is crucial to set up an agricultural plan to feed the 68 million Congolese, for their own sake and for the Bonobos survival.

Farmers rely on slash and burn farming which leads to a reduced habitat for the Bonobos and so does industrial logging, legal and illegal, despite of moratorium of the government. 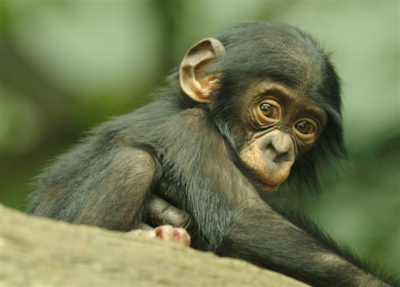 Fortunately, the Bonobos weren’t too impacted by the Civil War that ended in 2003, but extreme poverty has led to increased pressure on wildlife and natural resources.

Gorillas and chimpanzees have been severely hit by the Ebola virus, and so are the Bonobos.

Orangutans, Chimpanzees, Gorillas, and Bonobos have now become a commodity. They are being kidnapped, shipped, traded, killed and their parts are sold on the black market in Asia and the Middle East. Author and Scientist, Brian Hare, reveals,”They work together to chase monkeys, and they’re quite effective when they chase them together.” He’s right. Almost 3,000 are lost from the wild each year.

But, there is still hope. Despite the difficulties the Congo has endured, the Congolese government and many communities are dedicated to preserving the beauty and abundance of their country. The government has committed to set aside 15% of their land for conservation. Brain Hare states, “so what we see in the wild may really be sophisticated.” And, it is!

It is our duty to preserve that sophistication and join in the stand against organized wildlife crime before it’s too late. Download and print the action poster here http://j.mp/1yMHNES and share your photo on the Great Apes Survival Partnership’s Facebook page and your social media profiles using the hashtag, #SeriousAboutWildlifeCrime.

You can also join the fight and save a Bonobo by adopting one HERE!