Spring/Summer weekends are a great time to visit wineries – that welcome dogs! When you think of a winery you think of lush green vineyards with row after row of crisp tasty abundance. You dream of barrel after barrel of wine stacked on top of one another holding what certainly tastes like heaven. You envision bottles of red and white filled with the exquisite vintage tastes of the past. But you don’t think of dogs, do you? Animal Fair has supplied you with wineries and importers that will give you a taste of their best Merlot and a look at their cast of canine connoisseurs. 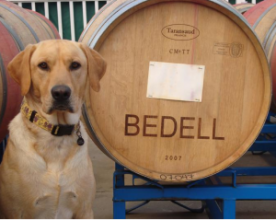 Bedell Cellars, located in Catchogue, NY, is one of Long Island’s premier producer’s of Merlot. Bedell Cellars slogan is “3 Vineyards, 2 Tasting Rooms, 1 Winery, World-Class Wines”. What the slogan fails to mention is the twenty-three adorable dogs that inhabit the vineyard.

The Bedell Dogs are eight weeks to eleven-years-old and their breeds consist of Golden Retriever, Husky, Boxer, Miniature Dachshund, Pekinese and many more. All of these animals are proudly owned by members of the Bedell Cellars staff. These animals bring laughter and enjoyment to the winery’s atmosphere. They assist in stress relief while making Bedell a comfortable and friendly place to visit.

These fabulous furry friends are needed in two capacities at the Winery: working and ambassador. Ripple, a three-year-old Yellow Lab Mix, Roly, an eight-year-old Hound Mix, and Willow, a three-year-old Yellow Field Labrador Retriever, and all earn their keep. Ripple, owned by Kip Bedell, General Manager and Winemaker, is the winery dog and also his right hand dog. Ripple can be found  during harvest on the crush pad, in the tank room and casegoods area. He is reserved around strangers, but takes his job seriously. Roly and Willow work with the vineyard crew all season long. They prune in the winter, tie in the spring and harvest in the fall. In addition, the devoted dogs try to keep the vineyard vermin free and have been known to run off the deer population. “Willow is exuberant in her work and Roly is the curmudgeon,” says Holly Palm, Assistant Manager at Bedell Cellars Tasting Room.

All of the regal, active and intelligent canines bring a sense of extended family and levity to the vineyard. They enhance the environment for customers, who tend to stay longer and remember the Bedell Cellars the next time they plan to make a trip to a favored winery.

While most of the dogs don’t actually drink wine, they will eat the grapes. They also love to eat biscuits and pig ears in-between rounds of fetch and frisbee! 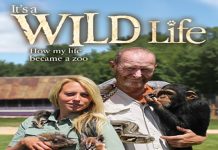