Have you ever dreamed of bird watching and boating in the tropics of Nicaragua? Does the thought of staying on a pristine island in the Granada Archipelago make you sigh with happiness? If you said yes to one or more of these questions you need to go to Zopango Island, the best preserved,most beautiful of the Granada Isletas and home to one of the cutest capuchins in the world – Cashew! 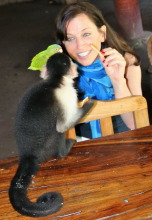 Flavia Bersani, the owner of Nicaragua Dulce – Ecotourism, had no intention of buying an island; however, when they saw it was for sale, while they were exploring the area, they decided to buy it as an escape for them and their friends from the commotion of Granada. They wished to keep the island as close to its natural state as possible, but in the process of landscaping to make the island a better refuge they realized that the island could be more than just a getaway without being harmed. Flavia’s father, Mauro Bersani, an experienced consultant in the field of ecotourism helped with this process. The hotel, which is hidden by trees and designed in a traditional style, is equipped with solar panels and 100% sustainable. But there is so much more to the island than that.

When the Bersani’s bought the island, they got a bit more than they expected. Other than the native “zorros con espina” (small foxes with spines) iguanas, turtles, and birds, the island is home to 4 rescued animals – a cat, two parrots, and Cashew. The cat, named Duchesse, was abandoned by a fisherman. The parrots, Carlito and Carlita, are cared for by one of the island’s keepers’ daughter. Of course, Cashew, the capuchin, a type of small white faced monkey, the king of the island has a much more interesting story. Cashew belonged to a family that was returning to Europe, where they could not keep him, so they asked the Bersani family if they wanted him. It was too late for him to go back to the wild, Cashew would either have to go to the zoo or live on a leash. The Bersani family did not want this to happen so, as Flavia described the situation, they decided “in emergency, to keep him like one month at [their] home in Granada so he could get used to [them]. Meanwhile we fed him with water & natural homemade fruit juices [with] a baby bottle… A month later then, he was discovering & settling down at our beautiful Island Zopango where he was gonna be free day and night! Without any predators or any other danger. As soon as he arrived, [the] island keepers adopted him, especially their little kids, and Cashew happily joined our three other rescues.” Now Cashew, named after the French licorice treat ‘Cashou’ and the nuts he loves so much, feeds himself the bugs, lizards, and seeds on the island (or the fruit brought to him) and caused trouble whenever possible, jumping on the backs of his favorite people or looking for new toys. Even if there was not an adorable little monkey making life fun, though, life on the island would be great because there is so much to do!

A visit to the island (for just a day or overnight) consists of an abundance of fun possibilities including kayaking, row boating, birdwatching, sunning under Mombacho Volcano, and eating barbecued fish, with an appetizer of fried sardines, an island specialty. The island is only open to guests, which makes it completely private and quiet enough for wildlife watching to be easy. This is particularly special because it gives the turtles that visit the beach to lay their eggs in safety.