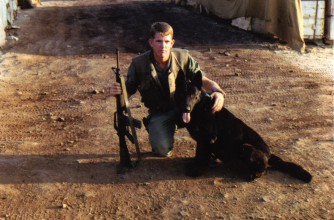 The United States has a long history of welcoming back its war heroes, including the 4-legged soldiers in the K-9 corps. War dog units have served valiantly with handlers in every branch of the service since World War I. These military dogs saved many lives as they worked as scouts, sentries, trackers and on dangerous mines and tunnels with their handlers.

But as the unpopular Vietnam War was winding down in 1975 with American defeat, things changed. Of the approximately 4,000 dogs that served in Vietnam, most never returned home at all. Although it’s been estimated that 10,000 Vietnam War casualties were avoided because of the courageous efforts of these dogs and handlers, they never received medals and discharge papers like the dogs of previous wars.

Unlike those dogs that returned home and were retrained to live the rest of their lives in peace, the Vietnam dogs of war were reclassified as equipment. When the war ended, some of these dogs were turned over to the South Vietnamese army who eventually abandoned them. Others suffered an even worse fate. Many were euthanized because those in charge said they had tropical canine diseases that could infect the U.S. dog population. But many Vietnam Veterans say that most of the diseases were treatable.

In 1972, Steve Conner, “Doc,” of upstate New York, was a veterinarian technician in the 34th Infantry Platoon in Vietnam. He assisted the veterinarian with everything from routine care to surgery if a dog was wounded in battle.
“Many of these supposed untreatable diseases could have been cured with antibiotics,” said Conner. “As the handlers went home, the dogs were put down.”
Fortunately for Conner, those who made these decisions said he was too close to the dogs and their handlers and two temporary veterinarian technicians were assigned the grim duty.
For the past ten years, some Vietnam Veterans have been working to rectify what they see as a terrible injustice. The Vietnam Dog Handler Association, established in 1993 by six handlers and with nearly 2,000 members now, is actively working to establish a permanent memorial for these forgotten heroes in Washington, D.C.
John R. Harvey, Chairman of the National War Dog Memorial Fund, says that with enough public awareness, funding, and action this tribute will become a reality.
“Every handler who returned from combat from any war, remembers their K-9 companions daily and appreciates the fact they returned home safely because of them,” said Mr. Harvey. “For the Vietnam Veteran dog handler, it has been particularly painful, given the ultimate fate of these dogs that provided so much love, loyalty and service.”

Most of the Vietnam Dogs of War were German shepherds, bred and trained specifically for war duty. But some were family dogs first. Betty Rowe of Michigan still remembers her dog Krim.  “She was a very good dog and it was hard to give her up,” said Rowe. “But when my husband died, I went to work full time. I donated Krim to the army and our family dog turned out to be a hero.” Krim served as a sentry dog alongside handler Michael Lister in the 34th IPSD from November ’66 to November ’67. Lister’s platoon sent a letter of thanks to Rowe after Krim alerted them to an enemy ambush and was shot in the nose and wounded. When Lister’s service ended, he left Krim behind in Vietnam to work with another handler.
“I’ve never been sure what happened to Krim, but I think she was euthanized,” said Lister.

Lister said the proposed dog memorial will not only bring closure and healing to him and other handlers, but will honor those who selflessly donated family dogs to the war effort.
Bruce Marshall and Amos served in the 212th Sentry Dog Company in Phan Rang Vietnam from 1966-68. As a young soldier, he recalls having a dog by his side as being a big comfort when so far from home. “I still remember how Amos and I communicated on a basic level,” said Marshall of Michigan. “Other handlers say the same thing. Our dogs knew they had a job and were serious about it. They shared our emotional highs and lows during the war. These dogs were just like us, except they were dogs.”

Jim Hart and Flop were partners from 1970-1971 at the 12th SPS K-9 PhuCat Air Base in South Vietnam. Flop served for seven years in Vietnam with Hart and four other handlers.
“I still have nightmares and it’s tough for me,” said Hart of Washington State. “All of us Vietnam Vets went through so much, but we’re still dealing with even more because of what happened to our dogs.”  On Memorial Day 2000, Hart wrote a letter and placed it with Flop’s photo at the Vietnam Veterans Memorial in Washington, D.C.
“Flop, I didn’t want to leave you behind, but I had no other choice. I don’t understand how anyone could just put you down. This was the reward you got for your faithfulness. You were more than just a dog. For me, you were a great soldier and my best friend.”
Back in 1969, Jim Fenwick from upstate New York was a dog handler with the 212th Military Police Co. just north of Saigon. During his tour of duty, he trained four German shepherds, including Prince and Luger.

“When we went on our nightly patrols in the middle of nowhere, it was blacker than black,” recalled Fenwick. “But with Prince at my side, somehow I felt safe enough to sleep even in a rice paddy because these dogs would die for you.” 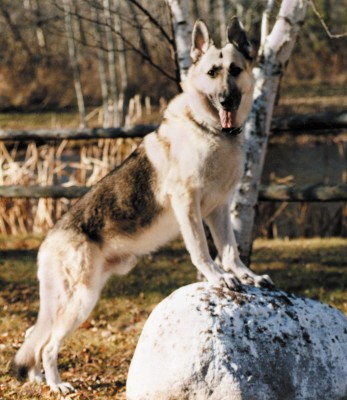 Fenwick said that during the Vietnam War the Army considered the dogs so valuable that he almost faced negligence charges when Prince got spooked and ran off. The dogs were so effective that according to some war-dog histories, the Vietcong offered a $20,000 bounty for a dog’s capture, twice as much as for a captured GI.
Carl Adams of Illinois was a sentry dog handler from 1967-1968 with the 35th SPS K9 at Phan Rang Air base in South Vietnam. Adams is the current secretary of the Vietnam Dog Handlers Association and has also written a book, Remember the Alamo about his experiences with Andy.
“Although there were different types of military working dogs, they all shared three things in common,” said Adams. “These dogs were always on the front lines and walked in harms way; they were teamed up with GIs who trusted their lives to them. They weren’t pets, but dogs and their handlers became an extension of each other; almost totally
dependent on each other for survival.”

William H. Moore of Missouri served with Colonel, a sentry dog, in the 212th MP Company at Pleiku and Soc Trang, Vietnam.
“Colonel had a nice temperament and liked to play,” recalled Moore. “But when working, he even alerted us to a four foot snake one dark night, refusing to budge or come off alert.”
And at the end of the day, Moore said that Colonel was also a good companion and someone to talk to.
“He shed continuously and looked forward to being brushed after walking guard duty together,” said Moore.
David L. Keeton of Missouri and King aka “Moo” because of the serial number on his dog tags, (M000) served in the 981st Military Police. King was also a family pet before he worked on many dangerous war missions including the Tet Offensive in 1968, the biggest battle of the Vietnam War.
“One thing that really impressed me about King was the pleasure he derived from doing what I asked of him,” said Keeton in a memoir he wrote about his experiences. “His big brown eyes would shine and it seemed like he was smiling when I complimented him on the great job he did. As time went on, King became my friend.”
John R. Harvey and the other members of the VDHA are hoping that the National War Dog Memorial will be realized in their lifetime. Besides money and education, the group is also seeking support in Congress.

“We need two congressional resolutions, the first of which has already been sponsored in the house by Robin Hayes,” said Harvey. “Leaving this educational legacy for our children and grandchildren is important to our country. When our memorial is dedicated, it will do more than honor our dogs. It will be an expression of our nation’s humanity and promote healing.”