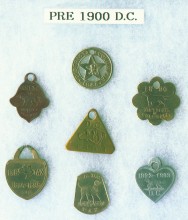 The earliest known documentation of dog licenses was in 1446 in Utrecht, Holland and the fee for the license was to be paid in salt. Salt wonít cut it anymore for these valuable treasures that give collectors a slight glimpse into dog ownership hundreds of years ago. In the past, pets were a relative luxury, reserved for the wealthy.

A crossbred stray named Owney is a ëposter dogí for dog licenses. Owney was lucky enough to be adopted by postal workers and to travel the world on various trains carrying mail sacks. His frequent travels began in Albany, New York around 1888 and he became a popular, regular visitor on postal routes all over North America and even to the Far East. The postal clerks purchased a collar for him on which to place his identification tag and employees of the Railway Mail Service began adorning his new collar with metal tokens and tags. During a trip to Washington, D.C. a postmaster presented Owney with a harness and jacket so that his collection of medals could be proudly accumulated and displayed. His collection reached an exceptional 1,017 tags, including several pre-1900 dog licenses from cities in Nebraska, Kentucky, Wisconsin and Washington. So beloved by the Postal System, Owneyís body was preserved along with his unique harness, and is now on display at the National Postal Museum in Washington, D.C.

The oldest  known American dog license is an 1853 Corporation of Fredericksburg, Virginia tag with the die makerís name ñ W.H. Bell ñ stamped on the front.  Tags vary from city to city ñ some were more elaborate and others were rather standard.   Chicago, Illinois, Baltimore, Maryland and Washington, D.C. created ornate, and attractive older metal dog tags. Shapes of tags range from round disks to cutout dog figurals, intricate numerical shapes, butterflies, doghouses, maltese crosses, state shaped planchets, acorns, bells, hearts, shields, stars, bee hives, locks, octagonal and scalloped bordered medallions. Events of the day had an impact on dog licenses, like everything else.  During WWII, fiber composition tags were issued because brass and aluminum metals were needed to make shell casings and other military supplies for combat.

Originally, dog licenses were intended to be disposable and annually renewed. Many have been discarded years ago; however, dog tags are frequently being unearthed through the use of a metal detecter. Such discoveries are met with excitement, as even a buried, corroded or damaged tag has value to a collector if it is a rare specimen. Some particularly coveted tags were ornate or sentimental which were kept by the dogsí guardian and withstood the passing of time. Dog tags that were mounted on or hung from dog collars were often preserved as a memorial to a very special, beloved family pet.

Historically, the fees collected from dog licenses have been earmarked for good causes.  The tax money that was generated from licensing canines went towards orphans, the poor and livestock owners. Currently, John Weinstein, treasurer of Allegheny county, Pennsylvania has created a fund called AAARF for neglected and abused animals that can be donated to when sending in yearly license forms and fees. This fund is connected to the annual licensing requirements, but is an additional option for county residents to heighten awareness and prosecution of animal abuse.

Antique dog licenses are gaining value and popularity.  Many pre -1900 dog tax tags are so rare that only a single specimen is known to exist. Early paper dog licenses came in a variety of colors, with or without a lithograph / wood engraving of a dog, the dogsí sex, age, breed, color and name on the front. The signature of the town clerk or county treasurer was also listed. On the backs of many, were detailed symptoms of hydrophobia (rabies) and advice to owners.

Other possible avenues for starting or adding to a collection are local flea markets and token shows. European tags arenít commanding the same price as American tags, because the demand is not as strong. Many European pre-1900 licenses are very well designed with dog head and body figurals, in particular those from the Netherlands and Austria. Current, worldwide dog tags are typically made of aluminum and they are particularly disposable and are not very durable. 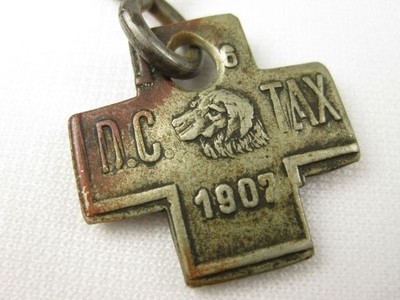 The island of Bermuda has begun to use stainless steel tags that are permanently used throughout the dogs life. Their license fees are steep and strictly enforced due to careless breeders, dog fighting and overpopulation. Most American cities and counties are reducing license fees to those who spay and neuter their pets. Senior citizens also receive discounted fees. This hobby will always remain unique and exciting. Each tag retains a certain wear pattern, patina, its own serial number…and an untold story behind it.