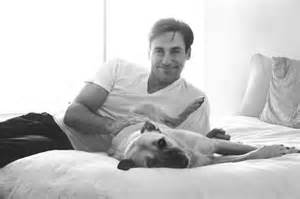 Animal Fair Media’s Wendy Diamond interviewed Hamm at his home in L.A. and found out he’s mad about Cora. Cora “daddy’s big little girl”, especially when she visited Jon on the Mad Men studio set, he revealed, “Cora is well-loved on set, well-loved by everybody. She’s just a very loved pooch.”

Jon enjoys walking Cora. He remarked, “She runs around at the dog park in Hollywood. The Hollywood dog park is very often a hangout, a hot spot.” When Animal Fair Media asked “If there is a celebri-pup Cora would have the most fun going on a doggie date with, who would it be?” Jon’s response, “Jake Gylenhall’s dog, he has a nice looking German Shepherd.” 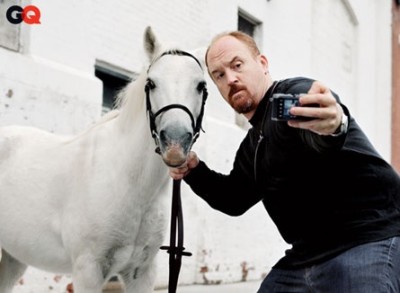 Hilarious Louis C.K. is an Emmy-award-winning stand-up comedian, writer, actor, producer and director has made every laugh count for a good cause – helping children and animal rescue! He has performed and donated to two organizations that are very close to Animal Fair Media’s heart; Green Chimneys, and Woodstock Farm Animal Sanctuary!