World Orangutan Day is held every year on the 19th of August  in order to raise awareness about the critical situation of our red haired relative and the rainforest they call home.

Some Indonesians believe orangutans are ghosts.  Elusive and intensely private, the red-haired primates are generally seen only in fleeting glimpses while swinging through thick jungle canopies. Almost nothing was known about these mysterious, majestic creatures before primatologist Birute Galdikas began her ground-breaking studies in 1971.  Now, some thirty years later, as rainforest destruction in Southeast Asia threatens the wild orangutan with extinction, Galdikas is trying to save this noble species from becoming a 21st century ghost.

Dr. Galdikas first encountered these beautiful beasts in the wild while working to complete her Ph.D. Traveling to Indonesia’s Tanjung Puting National Park, she set up a research facility—naming it ‘Camp Leakey’ after her mentor, Louis Leakey, the legendary anthropologist whose disciples include Diane Fossey and Jane Goodall. At Camp Leakey, Galdikas studied orangutans firsthand, sometimes following a single ape for days, and publishing articles describing their life cycles and social patterns. But she had to do more.

The call to “Save the Rainforests” may have first sounded in response to the destruction of Brazil’s tropical ecosystems, but Dr. Galdikas realized similar threats face Indonesia’s forests. Slash-and-burn farming, clear-cut logging and strip mining are eating away once vast expanses of old-growth jungle in Borneo and Sumatra. The results are fast money, huge tracts of land laid to waste and an orangutan population which has dwindled from an estimated high of 100,000 in 1971 to only 15,000-25,000 today.  Thus, in 1986, recognizing the perils facing orangutans, Dr. Galdikas founded Orangutan Foundation International (OFI). 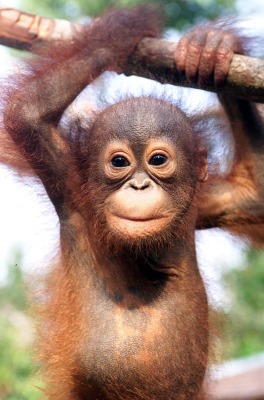 Featured on “60 Minutes II,” OFI works to spread awareness of the animals’ plight. Camp Leakey has now grown from a far-flung scientific outpost to a major center for environmental studies and eco-tourism.  Visitors can observe investigators at work, and even mingle with some of the orangutan “regulars” who stop by the camp. Many of these simian guests grew up with Dr. Galdikas as a surrogate mother. Most are refugees of ruined rainforests who were captured as babies after their mothers were shot from treetops by poachers or killed after wandering into crop fields and villages. Over the years, nearly two hundred orangutan orphans have received care, rehabilitation and reintroduction to the wild from Galdikas and her staff.

Dr. Galdikas estimates that if the current rate of forest destruction goes unchecked, the Great Red Ape has only ten years of life in the wild remaining. To promote rainforest preservation, OFI organizes efforts to re-seed forests destroyed by fire, logging and mining. The organization also coordinates patrols to protect the park, and plays a part in helping create orangutan-friendly employment for would-be loggers or miners.

Animal Fair readers can help OFI simply by making a conscientious design choice. Ramin, the yellow hardwood that grows mostly in Tanjung Puting National Park, is highly prized by illegal loggers. For the past few decades, the United States has been one of the world’s leading importers of Ramin. Simply by not buying items made of Ramin, AF readers will discourage illegal logging and the accompanying destruction of orangutan habitat. That’s just one way to ensure these “Ghosts of the Jungle” don’t turn into a specter haunting us with what might have been.

AF readers can also learn how to help by visiting OFI’s website at www.orangutan.org