Nine-time Emmy winner Sam Simon lost his battle today with colorectal cancer and died at his home in Los Angeles. He was known for writing howling episodes of Taxi, Cheers and It’s Garry Shandling’s Show, before co-creating the world renown animated series The Simpsons.  Simon was a sincere animal enthusiast, sponsor, patron, and donor. When her found out he was terminally ill in 2012, he donated the bulk of his fortune to animal-related organizations and causes.

He founded the $23 million Sam Simon Foundation, which rescues the hungry (human and stray canines alike), and has supported the Seas Shepherd Conservation Society as well as PETA. He has even created a refuge for dogs rescued from kill shelters, where they are then trained to become helpers for the deaf.

“I get pleasure from it. I love it. I don’t feel like it’s an obligation,” Simon said of giving back in an interview with Hollywood Reporter. “One of the things about animal rights … is that your money can bring success. I see results.”

RIP Sam Simon. Thanks for the laughs and saving countless animals.

The Sam Simon Foundation began where most non-profit organizations do not: in the writer’s room. And while writer/director/producer Sam Simon has worked on some of the greatest comedies television has ever seen, including The Simpsons, Taxi, Cheers, The Garry Shandling Show, The Tracey Ullman Show, The George Carlin Show and The Drew Carey Show, his foundation is no joke. It’s something of a utopian cage-free finishing school for dogs set up to help better the lives of rescues while readying them for a new life with a loving Parent.

Big ideas never begin big, however. The Sam Simon Foundation’s foundation began as something of a charitable kitty pool started with funds Simon earned directing network promos. Each week he would ask the writing staff for suggestions to where the extra money should go.

Simon said, “Some people would have charities that helped people and some had some that helped animals. I like people and animals so it didn’t make any difference to me.”

While exploring different charitable options within  his “writer’s room foundation,”  Simon stumbles across an organization that trained rescues to become assistant dogs for the handicapped, quickly realizing it did everything he had set out to do. “I thought, hey what a great idea! It helps people and dogs.” Soon The Sam Simon Foundation was born, developing a mission statement that reads: Saving Lives of Dogs to Enrich the Lives of Humans. Simon’s love for dogs is so evident his smile glimmers as he told Animal Fair, “Yeah, that’s what we do.”

The Foundation is located in sunny Malibu, California on a dream-come-true property that houses three full-time trainers and has two vets on staff. All dogs live in a cage-free environment and at any given moment visitors may see upwards of 25 dogs. Many of these rescues begin training for the foundation’s Assistance Dog Program, who eventually go on to assist those who are deaf or hard of hearing. All dogs in the program make weekly visits to assisted living homes through the Pet Visitation Program. Those dogs who cannot complete the training are adopted through the foundation’s Career Change Program. 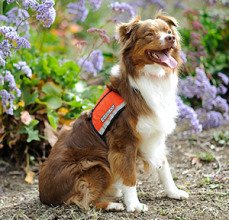 The foundation also provides visitation to several Assisted Living Homes in neighboring communities. A few of the dogs in the Hearing Dog Program accompany a member of our training staff on these visits. Not only do the residents have an opportunity to spend time with a dog in their lap, but the foundation’s dogs receive additional socialization which is very important to their training. Pet Visitation is an opportunity for dogs to visit with people under assisted care. While not Certified Therapy Dogs, similar benefit can be provided by these dogs such as lowering heart rate and stress, memory recall and social stimulus. Recent studies have shown the benefits of Pet Visitation to be as beneficial to the residents of Assisted Living Homes as other forms of therapy.

The Sam Simon Foundation has also launched its Service Dog program in response to the growing need of veterans coping with PTSD as a result of the Iraq/Afghanistan conflict. A Service Dog is not a cure for PTSD, but whose skills and companionship can be an aid for managing the symptoms and promoting well-being. The dogs are specially selected from local shelters based on their temperament and breed. Most of them are retrievers or retriever types. Some may be more energetic than others and so the exercise requirement will vary from dog to dog. Their training time is approximately 5-6 months. About 1 out of every 4 dogs will make it through the training to graduation. Dogs that do not complete training are placed for adoption locally and are coined “Career Change Dogs”. There is no fee to receive a trained Service Dog. All funding for this program is provided for by Sam Simon.

In addition to the foundation’s on-site facilities, Sam Simon also hits the road with its mobile Free Spay and Neuter Clinic, the largest provider in the Los Angeles area. Simon also mentioned that the motor vehicle may go on tour with Drew Carey and The Price is Right. Simon also started a Free Surgery Clinic for pet-owners in the lower income bracket who can come and get free surgeries from the staff veterinarians. “Its a roundabout program because it helps the person and their dog because their dog can’t afford surgery for their pet and the owner can’t afford to live without their pet.” 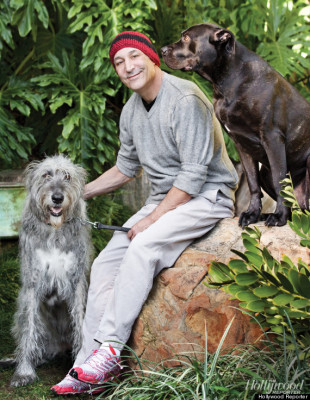 Sam Simon knows everything about building a loving pet-owner relationship as a proud, long-time dog owner himself. His affection for animals is even seen in the very first episode of The Simpsons (a series he was one of the original developers for) in which Homer brings home the family dog, Santa’s Little Helper, for Christmas. Simon has two Santa’s Little Helpers of his own, but they’re not Greyhounds – they’re Irish Wolfhounds and their names are Harvey and Gertie.

Simon’s love for animals extends outside his home. It has created a welcoming energy and drew in his impeccable staff. Barb Velasquez, program coordinator and one of the on-site Hearing Dog Instructors came to the foundation for this very reason. “My favorite part of the foundation is the relationship I have with all the dogs, recipients and coworkers.  I love working for Sam because I love his vision and the autonomy he gives us to carry out his mission.”

Barb and her fellow Malibu trainers, Lori Ramey and Kim Meinhardt, all see the results of the unique canine setup. “The dogs bond very tightly to each of us, particularly because they have been re-homed from a shelter. Every one of the dogs is special to us and contributes something special to others.”