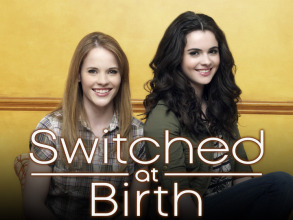 Katie Leclerc currently stars on the hit ABC family series Switched At Birth as Daphne Vasquez. During Switched At Birth’s third season, Leclerc continued to drive a strong fan base that follows her on social media. She is highly respected and applauded worldwide for her positive portrayal of a deaf character on the show.

She received her first big break in 2004 when she was 19-years-old and asked to guest star on Veronica Mars, starring with Kristen Bell. She went on to have guest and recurring roles on such series as; MTV’s The Hard Times of RJ Berger, CBS’s CSI, and it was her breakout role as Raj Koothrappali’s gold-digging girlfriend Emily on the hit CBS series The Big Bang Theory that brought her vast recognition and acclaim.

Leclerc started learning sign language at the age of 17-years-old before she even discovered that she had Ménière’s disease when she was 20-years-old. The disease is a degenerative inner ear disorder causing fluctuating hearing loss and vertigo. Her symptoms weren’t present in childhood, so her speech has not been affected. She uses an accent on Switched at Birth to emphasize Daphne’s hearing loss.

Leclerc is a spokesperson for the Purple campaign. Purple is an organization dedicated to developing fast, easy and convenient communications solutions and services for deaf and hard-of-hearing individuals and businesses using a variety of different platforms. She is also heavily involved in the Be Good To Each Other anti-bullying campaign, by custom designing t-shirts to raise money that provides awareness and support!

Before landing the role as Daphne in Switched at Birth, Katie’s fiancé Brian Habecost was her agent. Together, the couple found a dog on Craigslist, who turned out to be deaf. They named the Australian cattle dog Gus, after a character from Jeff Lemere’s comic book Sweet Tooth.  “Gus knows 20 different signs,” Leclerc proudly commented. More recently they adopted another sweet pup, a six-month-old Chihuahua-terrier mix named Sammy L Jackson.

As busy as this shining actor may be,  Leclerc is an active outdoorsy person, that includes hiking, running camping and mountain biking with her dogs! She revealed, “Gus and Sammy love to go hiking or go for walks, we take them to nearby dog parks and get them outside as much as possible.”

Leclerc constantly brings her two canine loves to the set of Switched at Birth. She shared, “I love bringing our pups to set, they hang out in my trailer and all day long, people stop by to pet them and play fetch, never a full moment.”

Leclerc supports and participates with Dogs for the Deaf, an organization and facility that raises dogs to “hear” for their owners, a cause close to her heart. Dogs for the Deaf also trains animals to help children with autism.

For more information on Dogs for the Deaf visit: www.dogsforthedeaf.org