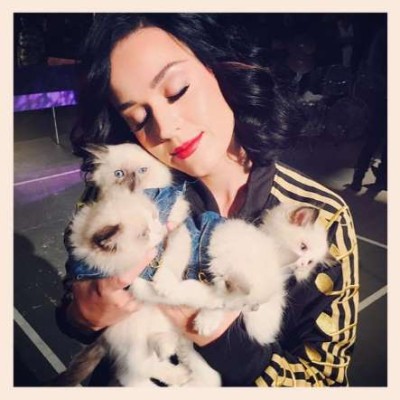 Cat lady Katy Perry and Dark Horse hitmaker is the star performer during the Super Bowl Halftime Show. The Super Bowl featuring the New England Patriots vs. Seattle Seahawks starts this afternoon at 6:30 P/E on NBC.

Perry sang about her upcoming Super Bowl “spiritual” music and performance. “I just have heard so many stories along the way of those songs helping people and how they have adopted them as their inspiration,” she told reporters. “And I think in some ways, I’ll be performing maybe for the first time for some of these people. This might be the first time people see me ever performing, and I get to play these songs. And to me, they’re very uplifting. So I just feel like in some ways it’s a spiritual experience for me, a little bit.” 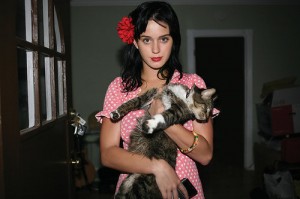 She may have a reputation for kissing girls and liking it and living a teenage dream, but pop superstar Katy Perry is also a proud mom to some very happy felines. Everyone’s favorite “firework” has three furry children; Kitty Purry, Morrissey and Krusty. Perry’s feline family even has their own fans! In 2009, Kitty Purry was nominated for a Teen Choice Award for favorite celebrity pet, but lost to the nation’s First Dog, Bo Obama, and she continues to have a strong following on twitter!

Kitty Purry’s name is a feline nod to the singer’s own name. Her other feline pal, Morrissey, is named after the lead singer of the 1980’s band, the Smiths. Her third and final cat, Krusty, is a mash-up of Katy and Rusty.

The pop star opened up to about her love for her cats and how they inspire her explaining, “Cats are like, ‘You have to earn my affection.’ I really associate myself with that. People have to earn my affection, but when I give it, it’s going to be good,” Perry explained. “I am obsessed with cats. I’m kind of trying to make that cat-lady personality cool.” 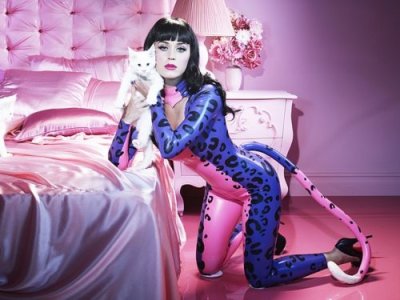 Kitty Purry, Morrissey and Krusty even dipped their paws into the business pool! The singer’s perfume, Purr (advertised with images of Perry in a slinky cat suit) is inspired by her favorite felines! Perry claims that her cats’ independent and sexy ways were huge inspirations for Purr. “My cats have a feminine way, it’s sexy,” said the multi-platinum singer.

Just like human children, the famous felines often misbehave and fight with each other. The kitty rough-housing even got to the point where the concerned pet parent was forced to hire a “cat whisperer” to help calm things down. 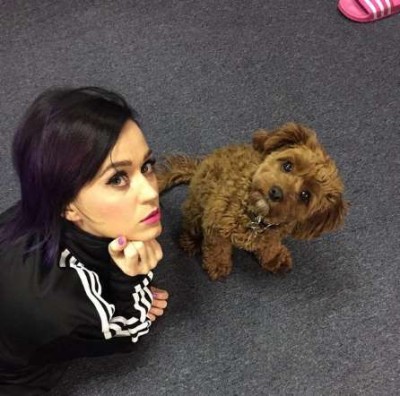 Perry adopted a dog last year named Butters when she was ”going through a breakup” with John Mayer. She recently gave custody of the dog to her longtime assistant, Tamara, because she is too busy to give Butters the love and attention he needs and deserves.

Look out for visual references to Perry’s love of cats and animals in her Super Bowl Halftime performance – something to roar about during the show! 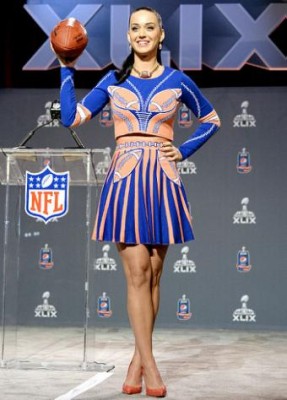