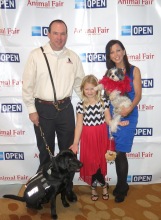 Our nationwide Bark Business tour rode in to Dallas for a patriotic breakfast with celebs, biz executives and of course … dogs.  The benefit event took place at the Omni Hotel and honored K9s For Warriors with Animal Fair’s very own Bestselling Author and Animal Advocate Wendy Diamond and Baby Hope hosting.

We honored – K9s For Warriors Graduates; Kevin, a United States Army Staff Sergeant that served 12 years and Patriot, a Labrador that was recruited from the Flagler Humane Society.

Top dogs in Dallas that said “Howdy” to saving a Veteran and rescued service dog at the Bark Business event include hosts; Comedian Funny Lady; Karith Foster, Bravo’s Dallas Most Eligible; Tara Harper and Big Ink PR ‘s Jeffrey and Tara Yarbrough.  The ”law” even showed up –  Judge Andy Chatham with his bailiffs! The judge’s young pup daughter, nine year-old Scarlett Chatham impressed by raising over $900 for K9s For Warriors! 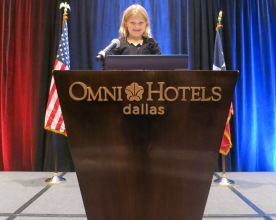 Nine-year-old Scarlett Chatham, a definite leader of tomorrow, spoke at the event about raising over $900 for K9s For Warriors.

Best Selling author and former United States Air Force fighter pilot Scott Francis O’Grady landed support at the event! The 2001 film, Behind Enemy Lines is based on his 1995 war experience when he ejected out of his jet over Bosnia after being hit by a missile fired from a Bosnian Serb SA-6 mobile rocket launcher.

After Animal Fair’s Wendy Diamond learned the alarming statistic that, according to the Department of Veterans Affairs, a Veteran affected by Post Traumatic Stress Disorder (PTSD) or a Traumatic Brain Injury (STI) commits suicide every 65 minutes.  She dedicated her How To Train Your Boss To Rollover book tour to raise money for K9s For Warriors. Our goal was to raise at least $10,000 to graduate one Veteran and one canine  through the successful K9s For Warriors program. We far exceeded our goal and happy to announce that two Veterans with PTSD in New York can now apply to the K9s For Warriors program – thanks to all of our generous donors!

Special thanks must go out to the fabulous Omni Hotel for donating their magnificent hotel and beautiful breakfast to honor our Veterans and Service Dogs. Many thanks to Ellen DeGeneres’ HALO, Purely For Pets for the special doggy buffet for all the dogs and especially the service dogs who happily dined on Spot’s Stew, a delectable doggie delicacy made from all-natural chicken, beef, salmon, or lamb and healthy whole grains,  nutritional fruits and vegetables. No corn or rendered animal parts for our four-legged friends!  American Express Open for handling our business so we can focus on our passions!

Animal Fair and Wendy Diamond encourage everyone to adopt, foster and rescue until the United States becomes a “No-Kill” nation.

Please join us at our last stop on the tour; Philadelphia, on November 16th! Veterans have fought selflessly for us, now it is time for us to fight for them! Donations and tickets are available to attend here.

WENDY THANKS EVERYONE THAT CONTRIBUTED TO THE SUCCESS

OF THE DALLAS BARK BUSINESS BENEFIT!