Our nationwide Bark Business Breakfast Tour  was Hot in the heart of Chicago, Illinois at the Omni Hotel on Michigan Avenue . It was a paw-studded event that honored two Veteran/canine pairs that have recently graduated from the 100% successful K9s For Warriors Program! 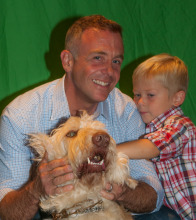 David Eigenberg and his son with Service Dog Cody!

We honored two K9s For Warriors graduates including Kelsey & her Catahoula Leopard service dog  Josie.   She served in the Navy and rose to the rank of E-5. Justin,a former Staff Sergeant in the United States Army, where he served for 7 years. He graduated from K9s For Warriors in May 2012, where he was paired with Cody, a Labradoodle.

The K9s for Warriors program was founded by Shari Duval after her son returned from war with PTSD.   Duval claims, “The warriors arrive here broken on two legs and leave walking with six legs recovered.  They are able to do things that were not possible before they received their service dog.” She added, “These dogs provide more medical improvement for the warriors than all the drugs they have been placed on.”

After Animal Fair’s Wendy Diamond learned the alarming statistic that, according to the Department of Veterans Affairs, a Veteran affected by Post Traumatic Stress Disorder (PTSD) or a Traumatic Brain Injury (STI) commits suicide every 65 minutes.  She dedicated her “How To Train Your Boss To Rollover ” book tour to raise money for K9s For Warriors.  Her personal goal was to raise at least $10,000 in Chicago to put one Veteran and one canine  through the successful K9s For Warriors program. She teamed up with the cast of NBC’s Chicago Fire to make this dream come true for a lucky Veteran! 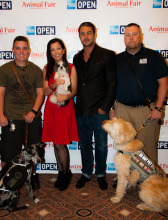 Special thanks must go out to the fabulous Omni Hotel  for donating their pet-friendly space and beautiful breakfast to honor our Veterans and Service Dogs. Many thanks to Ellen DeGeneres’ HALO, Purely For Pets for the special doggy buffet for all the dogs and especially the service dogs who happily dined on Spot’s Stew, a delectable doggie delicacy made from all-natural chicken, beef, salmon, or lamb and healthy whole grains,  nutritional fruits and vegetables. No corn or rendered animal parts for our four-legged friends!  All guests went home with doggy bags including rover.com dog-sit gift certificates, Burts Bees pet products, lara bars for the two legged in attendance and our very own Wendy’s new book How To Train Your Boss To Rollover.

Wendy Diamond and Animal Fair’s goal is to encourage people to donate $10, $20, $100, $500, $1,000, sponsor a Veteran as an Honorary Chair for $10,000, or whatever amount donors can afford.  If only 100 people donate $100 per city, the objective will be reached in each city on the tour. K9s For Warriors is a transparent charity and 94% of every dollar will help a veteran with PTSD receive a service dog from K9s for Warriors. Shari Duval, Founder and Executive Director, of K9s For Warriors does not take a salary. 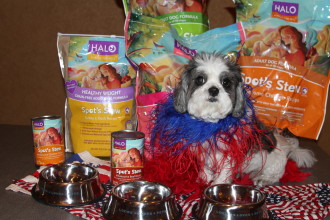 We are still hoping to raise enough money to save 2 Veterans with PTSD in Chicago and 2 dogs from being euthanized! Still time to contribute….Click here!

Please join us for our next hoe down I mean benefit in Dallas, Texas on November 14 or you can attend in Philadelphia, New York, San Diego, or Los Angeles! Veterans have fought selflessly for us, now it is time for us to fight for them! Donations and tickets are available here.