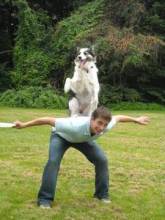 Zak George, the noted extreme pet trainer and his beloved Border Collie Venus made the giant leap from the computer screen and guest appearances to landing their very own series on Animal Planet, SuperFetch.

Zak has been intrigued with dogs for years, and it was after spending time with his older brother’s German Shepherd, Levi, that he decided that it was time for hime to become a pet parent himself.

Venus captured his heart when she was only six-weeks-old and had been his faithful Frisbee companion for the last six years. In that time, Venus has garnered numerous Frisbee championships and has multiple television appearances under her collar.

Most notably, the dynamic duo has appeared on Animal Planet’s Extreme Canine Stunt Show, The Utlimate Dog Championship, and the Discovery Channel. They were featured on The Late Show with David Letterman.

In their time together, Venus has developed a love for fetch, soccer, and new tricks that include walking like a person, rolling over, and mastering agility tasks. In fact, her passion for sports led to a fan following of over three million viewers on You Tube.

Through this new and exciting endeavor with Animal Plant, Zak wants to spread his love for dogs and training around the world. He genuinely wants to get to more people involved with their pets in a way that would be mutually beneficial for both humans and canine. “It’s all about looking for other signals that the dog uses to communicate. Teaching a dog is as simple as learning their body language,” says Zak.