Dick Clark is one of the most widely recognized names in the entertainment industry. From the be-boppin’ 50’s to the rappin’ 90’s this media icon has been responsible for more hits than Babe Ruth. 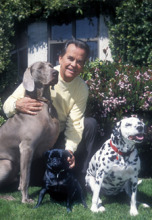 American Bandstand set the stage for a string of television programs that ranged from TV’s Censored Bloopers to the Golden Globe Awards. With several major television projects airing annually, Dick Clark is one of Hollywood’s top producers of network series.

However, from the moment you step into the reception area of his Burbank office, it’s obvious that Dick Clark Productions is going to the dogs. Big dogs, small dogs, spotted dogs and visiting dogs all roam freely throughout Clark’s home away from home.

“They have complete run of the place,” said Clark referring to his canine cronies. “Our dogs come to work with us every day, and they just hang out where ever they want to. Today we have four dogs here and one who is just visiting.”

Clark has a very eclectic bunch of pooches, and each one has a unique tale behind their moniker. For example, there’s Molly, the matriarch of the group. This 16-year old Weimaraner was named after Little Richard’s hit record “Good Golly Miss Molly. Lucille is a six-year-old Dalmatian. This spotted pooch was a gift from recording star Gloria Estefan. The youngest member of Clark’s canine clan is one-year-old Eleanor, named after the Beatles tune “Eleanor Rigby.”

a? “Eleanor is, well, we really don’t know what she is; she’s just a dog,” Clark says with his famous laugh. “We got her because she was abandoned, so we don’t have a lot of information about her. She’s wearing a red ribbon today because it’s her approximate birthday.”

Clark calls them his rock and roll dogs because they’re all named after hit records. Another member of the group is 10-year-old Bernardo, a combination Dachshund & Chihuahua. He may not be named after a top 10 record, but this low-to-the-ground hound tops the charts on Clark’s all time favorite hit list. A stray, Bernardo got his name when he was saved from the mean streets of San Bernardino by Dick and his wife Kari. They spotted the orphaned mutt and instantly adopted him.

“We picked Bernardo up off the streets of San Bernardino and took him to the pound,” recalls Clark. “They were going to put him away, so we said ‘no, he’s going home with us.'”

Clark’s affection for his four-legged pals, and Dachshunds in particular, began when a relative gave him a wiener-dog while he was living in New York. “My very first dog was a Dachshund. I remember it vividly; my favorite uncle gave me a little China dog. That was the first; over the years we have had several Dachshunds. They are very loveable; I really like the way they look and I love their personality”.

From LA. to P.A. and around the world, Dick Clark has legions of fans, but none of those autograph hounds can hold a feather to the devotion displayed by his most loyal followers, Molly, Bernardo, Lucille, and Eleanor. The minute Clark moves toward the door he is flanked by a mixture of spots, fur and cold noses. Each one trying to inch closer-and-closer to their famous mastea?r as they make their way to the parking lot.

“We go everywhere together,” says Clark about his dogs. “They are practically raised here at the office and when they’re not here they are at home with me. My old gray dog Molly’s pups were born at our house, then the next day they were here at the office with us. We kept one of the puppies; she was a wonderful dog who unfortunately died last year of cancer. Our dogs have a great life. They live at the beach where they can run and get lots of exercise. The rest of the time they are surrounded by people either at home or at the office.”

Watching this potpourri of dogs wander about Dick Clark Productions is worth the price of admission. Sometimes they move as a group, other times they just pick a spot on the carpet and plop themselves down. It’s up to the humans in the building to maneuver around them, cause they sure as heck aren’t going to move if they don’t feel like it.

“They are a very interesting group,” Clark says. “Each one has a unique personality. Molly is like a Sherman Tank. She’s gray and when she stands, Molly looks very threatening. But she is really just a good old dog. I’ll give you an example of how good a dog she is. We have a woman who works for us at the house and she is getting a little hard of hearing. One day she was walking the dogs up our driveway. It’s rather steep and flanked by large heavy California Coral trees. At one point Molly froze in her tracks and refused to move. The lady tried her best to get Molly to move, but she wouldn’t budge. A moment later a huge limb fell. Had Molly not made the woman stay put, the branches would have surely hit her. I think Molly was able to hear the branch cracking and knew that the woman was walking into harms way. I bea?lieve that Molly saved her life.

“Now, our male Bernardo lives in a world of his own. He can get into some very deep moods. If he knows we’re going away he can become very expressive. If he sees the suitcases come out, he goes into a total funk. His ears go back, he sulks then he stands by our clothes to see if we will pack him. He has more personalities than Sibyl. You can see through him like a pane of glass. When he’s happy you know he’s happy, and when he’s ticked off you know he’s ticked-off. Lucille, our Dalmatian, is just a happy-go-lucky animal. She is a beautiful dog and knows it, and very bright. You can have a conversation with her like you would a human and she’ll respond. For example I could say to her, ‘Lucile, go find Molly’ and she will. Eleanor is our latest arrival and we haven’t got her figured out just yet. She still has a street dog mentality but is adapting very well to her new surroundings and the other dogs.”

According to Clark one of the greatest attributes of his dogs is the fact that they help him to keep life in its proper perspective. “They make you realize that life isn’t always about work. Our dogs help relieve stress. They remind us that the good things in life are good friends and someone to love. When a dog walks into a stressful situation they remind you that what you’re doing isn’t all that important.”