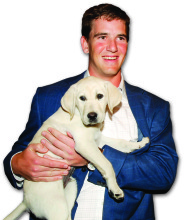 This June, the Mount Kisco Country Club and the Whippoorwill Club in Armonk, NY play host to the 31st Annual Guiding Eyes for the Blind Golf Classic. Sixteen members of the United States Blind Golf Association (USBGA) compete for the coveted Corcoran Cup.

Since its introduction in 1977, the fundraiser has helped raise more than six million dollars. As an organization, GuidingEyes was created by PGA legend, Ken Venturi. His intention was to create a special school to breed and teach dogs to assist the blind and the visually impaired. Once matured, these dogs are then given to the blind or visually impaired person at no
cost to them.

This year, Guiding Eyes is proud to welcome back as host, recent Super Bowl MVP, Eli Manning. This will be the second time that the New York Giants quarterback has hosted the event. As a close friend of one of the blind golfers, Pat Brown, Jr., Manning has felt an immediate closeness with Guiding Eyes and their fundraiser.

When asked by NBC’s Bruce Beck about being named honorary chairman of the event, Manning smiled and exclaimed, “I’m very
excited. One of the greatest golfers of all time, Mr. Pat Brown is an old friend … I have so much respect for him and what he’s done … it’s truly an amazing thing to see, especially if you play this sport, you know how hard it is.”

And Manning was greeted with a special surprise during the ceremony honoring this year’s tournament. Guiding Eyes’ Puppy Raisers named their newest puppy after the Giants quarterback. True to form, Manning was both surprised and honored by the news.