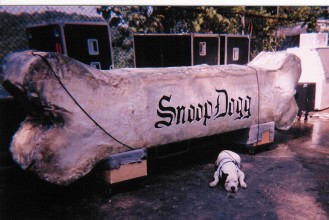 It’s highly unlikely that the average dog would get to travel outside his neighborhood dog park and see the world. However, Bulldozer (a.k.a. ‘Dozer) is not your usual dog as this ‘rockin’ rover’ has been around the world and back. ‘Dozer is a freewheeling ‘road dog’.

‘Dozer is a five-year-old American Pitt-bull Terrier and belongs  to “A Entertainment” truck driver, Sylvia Wagner.  As an en- tertainment truck driver, Wagner spends much of her time on the road hauling concert gear for musical artists such as Linkin Park, Snoop Dog, and Green Day.

Touring around with the artists meant being on the road for long periods of time, which posed a solvable problem for Wagner, “I couldn’t leave ‘Dozer home for months at a time, so there he went,” says Wagner. Thus, kick starting ‘Dozer’s career as a traveling road dog.

Wagner and ‘Dozer spend a lot of time trucking from city to city, especially at night.  For Wagner having ‘Dozer on the road with her is a real bonus, “During the day we hang out and sleep. At night, ‘Dozer helps me stay awake by sitting in the passenger seat or by just putting his head in my lap.”

While on tour, all crew members including Wagner are required to wear a form of identification that proves they are a member of the staff, “we all carry laminate credentials and ‘Dozer has his own, too!”  ‘Dozer is, in many ways, just another member of the crew and takes his post as guard dog very seriously.

“’Dozer is a great guard dog.  He knows his job is to guard the truck, and that’s what he does!” Wagner proudly comments, “Like everyone else in the crew, he gets a big thank you at the end of the show, “Sometimes at the end of a tour he gets to come up on stage when the artists thank everyone for their hard work.  The audience loves him and ‘Dozer loves to bark at the pyro,” Wagner adds.

While ‘Dozer is not a show dog, he does have a natural tendency to hog all of the attention from the crew, and even from stars.  Wagner sings her dog’s praises, “’Dozer gets all the attention at the venues, crew members bring him bacon from catering, they buy him toys and play with him. Even the artists come over and pet him, here and there. ‘Dozer really had fun with the guys from Linkin Park and Judas Priest, those guys liked him a lot and it showed.”

Thanks to Sylvia Wagner’s job as an entertainment truck driver, ‘Dozer has traveled all across Canada and the United States and will continue to journey to new locations and help with the production of  memorable live ‘Rock N’ Roll’ performances for many musical years to come.