Each year, the Chinese celebrate the coming of the New Year with fireworks, traditional foods, parades, and this year it goes to the Dogs!

This year, the Chinese New Year will fall on January 29, 2006. There are 12 zodiac signs in the Chinese lunar calendar. Each zodiac sign corresponds to a specific animal, each having its own unique characteristics. It is believed that a person born under a certain sign is imbued with characteristics associated with the corresponding animal. 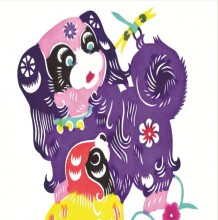 Now 4703 on the Chinese calendar, this year, the zodiac sign is the Dog. According to tradition, people who are born under the Year of the Dog – this group that will include Gwyneth Paltrow and Chris Martin’s second child, and Brad Pitt and Angelina Jolie’s genetically-blessed baby – is said to possess some of the best traits in human nature. For instance, because they are loyal, honest and trustworthy, people born during the Year of the Dog make superior leaders. According to this logic, Prince William, born in Dog year 1982, should make a great King of England one day!

Those born during the Year of the Dog are also unpretentious. Money is not important to them, although, like the long list of glamorous celebs born under Fido’s animal sign, they’re never short of funds. Cher, Steven Spielberg, Mariah Carey, and Jennifer Lopez are not likely to end up in the doghouse anytime soon! Dog-signers can also be difficult to satisfy, which is perhaps why so many of them, such as tennis pros Andre Agassi, Pete Sampras, and Andy Roddick, and actresses Anna Paquin, who won an Academy Award at age eleven, and Dakota Fanning, are driven to succeed at a very young age.

They are noted for their sharp wit and eccentricity, and often make great performers and comedians, like legendary queen of sass, Shirley McLaine, funny gal Ellen DeGeneres, and adorable daytime host – Kelly Ripa. However, like our four-legged friends, people born in the Year of the Dog can be selfish and stubborn, which may account for notorious supermodel Naomi Campbell’s occasional biting and barking!

What does the New Year mean for our canine friends?

Well, for one thing, pet sales have already begun to increase in China. According to some Chinese, it is best to avoid Dogs that are fat or have long hair. They believe that fat Dogs can contract asthma or heart disease more easily and Dogs with long hair tend to be a lot more trouble in the summer.