Most of us don’t spend much time pondering chickens unless we work on a farm or our last name is Perdue. However, chicken intrigue has recently spiked thanks to two new books that have left the publishing world clucking.

Chicken legs, anyone? Out on the road for months to promote his first book, Hen and the Art of Chicken Maintenance, journalist Martin Gurdon unexpectedly found himself with the makings of a second book, Travels with My Chicken, as he motored across England with a chicken as his co-pilot.

Gurdon decided it would make sense to have a chicken accompany him while he tried to hawk a chicken book, so six-month-old “Peeping Chicken” was selected and an old cat box became her car seat. Not surprisingly, when Gurdon made appearances at book stores and radio stations to promote his book, people were more inclined to notice his feathered companion. Out on the road, however, Gurdon says there were times when people wondered if he was … okay. “You are treated with care,” he says. “A chicken out of context comes as a surprise.” And as if a live chicken wasn’t enough to attract attention, Gurdon had also placed a wooden chicken on the roof of his car.

Frankly, he should have known that he and his feathered friend might be greeted with strange reactions; it wasn’t the first time he showed up somewhere with a good-looking chick on his arm. As part of a writer’s workshop, Gurdon once took a plucky hen named Vera to Ford Open Prison, a low-security facility in West Sussex. One would think that prison personnel would welcome this unique duo to entertain the current residents. But countless e-mails, letters and calls to assorted governors were required before Gurdon found a security facility that would take him seriously. There was even speculation that the motive for bringing Vera involved hiding weapons in her feathers! Ultimately, the visit to Ford Open Prison went smoothly once he and Vera were both frisked and it was determined that there was to be no fowl play.

Every two or three days, Gurdon returned home from his promotional tour, regrouped, and sometimes swapped chickens. “Tikka” was another passenger. When asked whether or not the chickens ever got car sick, Gurdon said that they traveled remarkably well, elaborating, “One time on a twisting lane in Wales with Tikka, I heard strange noises coming from the back seat. Indeed, she got so relaxed in the car that she laid an egg!”

Gurdon grew up in Lancashire, England and lived with his aunt and uncle and a few pet hens. Later, he and his wife, Jane, raised their own hens, which led to Gurdon’s Hen and the Art of Chicken Maintenance. Gurdon currently has nine chickens. There was a time when Gurdon could be found writing at his desk with a chicken snuggled on his lap. Is there anything Gurdon gets from a chicken that he doesn’t get from his dog? (Besides eggs, of course.) “Comedy, mostly,” he replies. “They’re always on the go, and it’s amusing to watch them strutting about. They’re also pretty things to have in a garden, even if they wreck it!” To learn more about his adventures, check out Martin Gurdon’s Travels With My Chicken, which will prove to be a very funny account of his road trip with an unconventional sidekick in the passenger’s seat. 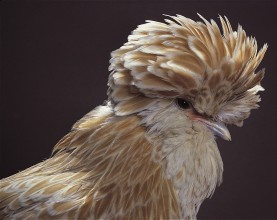 Green-Armytage discovered his photographic subjects at poultry shows mostly in the United States, but also in England and the Netherlands. Green-Armytage remarks, “In the Netherlands, you can just take the bird out of its cage and leave a note!” Hoping for more spontaneity in Extra Extraordinary Chickens, he chose not to pose the birds, but rather to photograph them as they moved around the space naturally. “There’s more sex and action in this book,” Green-Armytage jokes.

Were some birds friendlier, wilder or more timid (dare I say, more “chicken”) than others? Green-Armytage replied that the birds were “relaxed, cooperative and mostly easy to handle. Once in a while, one would flap up and land on my lighting equipment.” Whatever the situation,

Green-Armytage no doubt made each chicken’s individual personality shine. The Bearded, Golden Laced Polish Chicken is reminiscent of a sixties beatnik, the Non-Bearded White Polish Chicken looks a bit like Debbie Harry and the Non-Bearded White-Crested Buff Hen bears a striking resemblance to Carol Channing. A far cry from our infantile image of Old McDonald’s farm …

Travels With My Chicken and Extra Extraordinary Chickens bring our feathered friends into a whole new light, depicting unexpected individualities and a profound capacity for companionship, proving there’s a lot more to these clucking birds than feathers and eggs. Flock to your nearest bookstore and enjoy!