From its inception, this non-profit group’s main goal was to save abandoned pets from being euthanized in local city shelters.

And thanks to the hard work and dedication from its all-volunteer staff, The Rescue Train has successfully found homes for thousands of the city’s once-forgotten animals.

But what really makes The Rescue Train different from other animal rescue shelters is its unique dog training program, Young explains. “Two years ago, we met dog trainer Julie Iles and boy, did our organization take off! We have always believed that no dog should be euthanized because of lack of basic obedience training. Yet the fact is, many dogs are turned into the shelter for just that reason, and the average person looking to adopt wants a well-trained dog.”

According to Young, Julie Iles’ contribution to The Rescue Train has been sizable. “Julie has taught us that dogs do have the ability to learn and change their behavior. We put [the dogs] through not only basic obedience courses, but the ones with bigger issues will go through three weeks of intensive training. It is amazing to watch how the dogs learn, how the training makes them much more adaptable and sets them up for successful adoptions.”

“Our goal is not only hands-on rescue work, but education and awareness,” Young continues. “Spaying and neutering our pets is the number-one solution to our pet overpopulation. We have several different programs that we are developing and promoting to make people aware of the pet overpopulation in this country.” The Rescue Train wants to spread the word about this problem beyond California’s borders, uniting animal lovers across the country so that significant changes can take place – namely, the end of euthanasia.

“The bottom line is, the more money we make, the more lives we can save. Our biggest fundraiser is an art auction where celebrities and their pets put their hand prints and paw prints on pre-painted canvases.” Contributing celebrities included Jennifer Aniston and Charlize Theron. 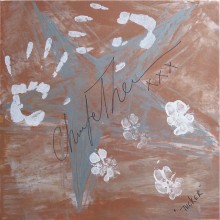 Each dog and cat that The Rescue Train finds is showcased on advertisements in newspapers, flyers and on the Internet. In addition, pets adopted from The Rescue Train will always have the support of the organization behind them. Rescue Train pet owners are encouraged to call Young and Johnson for any help they cannot themselves provide.