The story of Mai Tai begins in Bangkok, a city that has one of the worst animal control problems in the world. Thousands of abandoned dogs and cats roam the streets daily in search of food and shelter. One of those homeless hounds was Mai Tai, a two-year-old Australian Shepherd and recent mom with four very hungry mouths to feed. 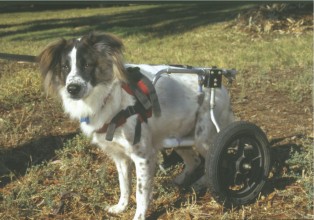 While crossing a busy street looking for something to eat, Mai Tai was struck by a cab. The concerned driver had seen the dog hanging around a nearby vacant lot. He carried her back to the lot where several new-born puppies were awaiting mom’s return. The taxi driver covered the badly injured dog with a piece of cardboard, picked up one of the pups and returned to his cab.

The dog’s fate may well have been sealed if not for a fifteen-year-old girl named Mina Sharpe. Mina runs an animal rescue center in Taiwan, and fortunately for the injured dog, she and her family were vacationing in Thailand when the accident occurred.

“I saw a group of taxi drivers standing around and one of them was feeding a young brown puppy from a bottle,” said Mina. “When I inquired about the pup’s mother, the man said ‘Mama, Taxi, Bam!’ then he pointed to a vacant lot. He said, ‘Still alive.’”

Mina talked the taxi drivers into helping her retrieve the injured dog. With their help, she climbed a barbed wire fence and ran over to the dog’s aid. “We pulled back the cardboard and we found three more pups nestled against the mother’s side. She raised her head but was unable to move. The poor thing screamed in pain when we attempted to move her.”

Urged on by the young girl, the taxi drivers constructed a makeshift stretcher from plywood then carried Mai Tai and the pups back to their cabs. Mina offered to pay for medical help and the taxi drivers volunteered to help her find a veterinarian.

The first vet they found didn’t speak any English, had no diagnostic equipment and didn’t want to offer his services, so they searched for another vet. The next one didn’t have any way to X-ray Mai Tai, but was able to administer a shot of antibiotics.

“One of the cabbies said he would take care of the dog until I could get proper help, so I bought him a large cage and some food,” said Mina. “Two days later the cab driver had vanished and I found the dog and her pups in the cage abandoned under a table next to the road. Horrified, I again rescued the dog and her pups and did my best to clean them up and provide medical aid.”

For almost a week Mina and her family cared for the badly injured dog and although it was an extremely painful ordeal for Mai Tai, not once did she struggle or try to bite the strangers who were helping her.

Mina eventually found a caring vet. Dr. Krongthong Ovareekul at the ThongLor Animal Hospital provided the medical help Mai Tai so desperately needed. “Mai Tai’s back had been severely broken and there was great pressure on the spinal cord causing the paralysis,” explained Dr. Ovareekul. “We did not recommend surgery because it was a very big expense and there was only a 1% chance of restoring her. All of us at the hospital were very moved by the dog’s plight and the efforts of the young girl who had done so much for the animal.”

“I considered euthanasia,” said Mina. “Mai Tai would need quality care that she couldn’t get in an animal hospital. But I also looked into her eyes and saw so much love. Somehow she still had the ability in her heart to forgive all that had been done to her. She licked me on the face and my heart melted; I knew that she had to be saved no matter what.”

Mina agreed to pay for Mai Tai to be kept at the hospital until a home could be found. With that goal in mind, the teen and her family returned to Taiwan. For five months Mai Tai called the ThongLor Animal Hospital home.

Having relatives in San Diego California, Mina devised a plan to find Mai Tai a home by taking her to the United States and appealing to the media for help. In May 1998, after arriving in Southern California, Mai Tai was featured on KFMB TV; one of the people watching was Ray Barnes, a retired sailor living in El Cajon, California.

“The minute I saw Mai Tai on television, I wanted her,” said Ray. “She was a survivor and if an animal ever deserved a good home, it was that dog. So I said to myself ‘I bet I can get that dog to walk.’”

Ray called the station and the following day he met with Mina and Mai Tai. It was obvious from the slight wag in her tail and the smile on his face that a perfect match had been made.

“Mai Tai has a little bit of motor function but my vet says nothing is getting through to her brain,” explained Barnes.  “I give her a deep tissue massage every day along with a variety of stretching exercises. She’s responding well, too. Mai Tai can put her legs down, and stand up on them now. I’ve converted her wheelchair to a walker by installing bungee cords to support her weight. This way she can sit down and still move her legs if she wants. She has no sense of balance and sways back and forth because no information is getting to her brain. One of these days I truly believe she will be able to walk without the aid of her stroller.”

Barnes has another dog, Chance, a Cocker Spaniel-Lhasa Apso mix who has also adopted Mai Tai. They’ve become the best of friends and love to take walks together. Since Mai Tai can’t negotiate the stairs, Barnes has moved his bedroom downstairs so that his two best friends can be at his side whenever they want.