He’s Got It All: Career, Family, Love – Even His Dogs Are Married! 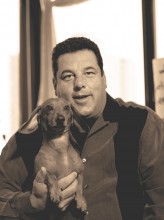 Steve Schirripa was born in Brooklyn, NY. He is most recognizable as Bobby Bacala on HBO’s hit drama, Sopranos. Schirripa has played many memorable characters on the big screen, including See Spot Run, Meet Joe Dirt, Detroit Rock City, Flintstones – Viva Rock Vegas, Casino, Fear and Loathing in Las Vegas and Play It To The Bone. He is the co-host of Casino Cinema on Spike TV with the beautiful Beth Ostrosky. Tackling the world of publishing, Schirripa is also the author of A Goomba’s Guide To Life which was a national bestseller! Also out in stores, The Goomba’s Book Of Love and his newest baby coming soon, Nicky Deuce – Welcome to The Family. The charming Sopranos actor sits down with Animal Fair to discuss career, family and his two dogs! Here, the highlights:

I have two Miniature Dachshunds, Bobby and Carly. Bobby is named after my character on the Sopranos. Carly is named after a buddy of mine, Carl, who died in September 11. Bobby and Carly were born in Vegas – we have a big house there. They run on their own out there. When we moved back here, it was a whole different thing to them. Coming down here and having to be walked.  Bobby never wore a collar until he came to New York. Bobby and Carly are married. They had a wedding in Vegas a few years ago. Carly was in a wedding dress and Bobby wore a tuxedo. They get along great! She takes care of him. They can’t be without each other.

They are a little loopy, the dogs. In Vegas, they chase birds. Booby is like the son I never had. He eats tuna fish – he must be the only dog that likes tuna! Bobby can be nasty with strangers, he snips.  He likes you or he doesn’t. He’s very particular. He sleeps in the bed with us. Carly is very easygoing. She just hangs out, like an old grandmother. She likes to stay in the house. She prefers not to go out. She likes the comfort of just hanging out.

We are in the middle of shooting right now. We’ll be shooting until next February. The show comes back in March. And I’m alive so far. We all worry about being killed off! It’s seriously a concern, you never know what’s gonna happen. I’m having a great time though. We’re all good friends. We were together last night, we’re going to a wedding on Saturday. These are all friends I’ll have for the rest of my life. Including the producers, the writers – it really is just like a family.

I co-host a show on Spike TV called Casino Cinema with Beth Ostrosky, Howard Stern’s girl. We’ve had some great guests. We teach the audience how to gamble – how to play poker. We’re not very good at it! It’s real loose, like being in your basement. I love working with Beth, the crew is great and the show is doing surprisingly well.

I’ve got three books. One was a NY Times best seller, The Goomba’s Guide to Life. I think people can relate with the family even if they’re not Italian. Jewish, Chinese, whatever- I think it really struck a nerve. I also have The Goomba’s Book of Love and pretty soon, a middle grade novel called Nicky Deuce, Welcome to The Family. That comes out in September. The reason why I wrote a kids book is because my kids don’t watch Sopranos.

I have a nine-year-old and a thirteen-year-old, Bria and Ciara. We go out to dinner all the time, they love Yankee games, Nick’s games! They are big sports fans, just like their father. They play a lot of sports – softball, baseball, soccer, basketball. They’re doing all right! My wife was born in Vegas and my kids were born in Vegas. The first year of the show, I commuted back and forth from there. Then we moved here and rented a house in Staten Island which was tough. We didn’t dig that. I commuted the following year and then we decided put the kids in school here.  So they’ve only been here for two years. I was born in Brooklyn. I moved to Vegas in 1980 and I didn’t move back until I started doing the show in 2000. I love New York. The people are great, the whole thing’s great. 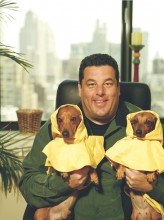 I believe in it, absolutely. My wife, we’ve been together twenty years, we’ve been married sixteen years. And we get along great. I certainly do believe you can find someone and we’re doing all right – two kids, two dogs. We got the whole shebang. Goomba love is unconditional love no matter what.

I have a clothing line coming out. A lot of characters on Sopranos are wearing my stuff. Men’s shirts and jogging suits. Not just for big guys. The regular guy look! It came out near Christmas. I just did a demo for a radio show on Sirius. I also have a deal with Touchtone TV for my own show, based on the book: The Goomba’s Guide to Life. I’m just working hard and shooting Sopranos. Hopefully, my character will still be alive the next time we talk!