A new home. Toys as far as the eye can see. A lifetime supply of unconditional love. It all adds up to a way better prize than any game show could ever offer its hopeful contestants, and a very aptly named kitty just found out how good it feels to win a brand new family. 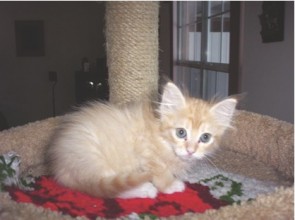 The Iams Company, in conjunction with the Helen Woodward Animal Center of Rancho Santa Fe, California, happily announced the honorary one-millionth adoption of the seventh Iams Home 4 the Holidays campaign. The pet upon whom this designation was bestowed is a felicitous feline who has most appropriately been christened “Lucky.”

Lucky found himself up for adoption at the end of his astounding and impromptu sixty-mile journey. Lucky’s travels are not remarkable because he ventured so far on foot; what makes this adventure so noteworthy is that this sturdy cat found himself inadvertently being transported from Mobile, Alabama to Pensacola, Florida via a car’s engine compartment. Lucky’s rescuers found him in a less-than-fortunate state, as one of his legs was broken and part of his tail was severed.

Even though he was in pretty bad shape, Lucky’s luck pulled a complete one-eighty when a Floridian resident welcomed the recovering kitty into her home, unknowingly turning his adoption into a pretty big deal.

But it’s always cause for celebration whenever a sheltered stray can discover a new life as a much-loved pet, and the Iams Home 4 the Holidays program understands that. This world-wide adoption effort began in 1999 with the participation of just fourteen shelters. Now, in the seventh year of the campaign’s dogged belief that joining animal adoption shelters together can cause a huge increase in the numbers of orphaned animals who get a second chance, more than 1,900 shelters have teamed up for this truly worthwhile cause.

The Helen Woodward Animal Center is a private, non-profit organization that created the international Home 4 the Holidays effort, as well as the Animal Shelter University program, which strives to educate its students on more effective ways to find homes for shelter animals. With the support of this animal center, the Iams Company and actress Diane Keaton, this year’s Home 4 the Holidays eagerly plans to tackle the task of connecting 350,000 homeless animals to loving adoptive families.

We’d all love to win an easy million dollars at some point in our lives. But there’s an awfully “lucky” cat out there who knows that money doesn’t mean a thing when compared to the joy that comes from going to an injured stray with an uncertain future to a much-adored pet with a loving home. And that’s the kind of game where everyone wins.