Pushing legislation to honor her late dog, Jazzy, was not enough for New York Post daily gossip columnist Cindy Adams, so she wrote a book in Jazzy’s honor. Adams’ new book tells of the loss of Jazzy, the dog who helped her through her husband’s death. Living a Dog’s Life: Jazzy, Juicy and Me, is filled with Adams’ well-known wit and humor, including hilarious anecdotes about life with her two “hairballs,” Yorkies Jazzy, Jr. and Juicy. Animal Fair’s Wendy Diamond met up with the Adams Family to get the real doggie dish. 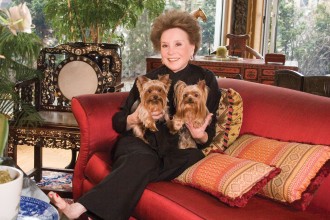 WD:    Was the basis for Living a Dog’s Life: Jazzy, Juicy and Me about the unfortunate death of Jazzy?

CA:     The book is about truly Living a Dog’s Life. It’s a story about my love for my original dog, Jazzy. After Jazzy contacted e. coli, I have made a pact to myself to never let something so unfortunate happen to any other dog.  Jazzy’s Law has been passed by the mayor and city council of New York City and now it’s in Albany with Governor Pataki as we speak. Next it’s going to Chicago, Boston and Los Angeles. Jazzy’s Law will ensure that no one has the pain that I had, of taking a pet they love, part of the family, to a kennel and then bringing home a dead dog. The kennels have to be licensed and monitored. They will be fined and shut down if they are caught with any animals that they don’t have all the appropriate health certificates.

WD:    What is your advice for people who are forced to leave their pets in kennels?

CA:     Leave your pet with a family member, your vet, neighbor anyone who you trust and that knows your pet. If all else fails, make sure they are a licensed dog kennel that the SPCA and local vets recommend. Make sure that they ask you for a rabies and flu shot, health certificates so you know they are asking that of everyone.

CA:     Yes, it certainly did. My dog was a beautiful dog. He used to lay on my stomach and I hand fed him kosher chicken. Where he would get e. coli in his system, I have no idea. In the book are my tears. I was in a fetal position for months afterwards, I thought I had died with Jazzy. You understand most people have a boyfriend, a husband, a sister, a mother or a father. I lost everybody within three months. All I had were my babies and they were very precious to me. I was lost without Jazzy.

WD:    What advice can you give grieving owners who have lost a beloved pet?

CA:     If you fall off a horse, you have to get back on. I didn’t cope at the beginning; I curled up like a ball. Juicy could not even eat, speak, or play. My breeder came by unannounced with three little Yorkie puppies and let them loose. They played around and I chose based on which one Juicy went for. Juicy, little by little, came out of depression. You have to get another dog.

WD:    I have new show called Relationship Rehab on the Style Network. Do you have any advice to pass on to the

WD:    How does having dogs compare to your many years

CA:     Well, the only love I get is when they lick my face in the morning. But I am totally content. There’s no room for any man in my bed with these two jumping around.

WD:    Which breed of dog would describe your personality?

CA:     Oh, I’m a Yorkie. I’m a terrier. When I get something in my teeth, I’m going to go with it. I’m going to yip and yap if something is not right. I want be on silk damask pillows and wear a jeweled collar. I want someone to take care of me and live in the lap of luxury. That’s my idea of a dog’s life.