This Multi-Talented Hit Woman Will Blow You Away! 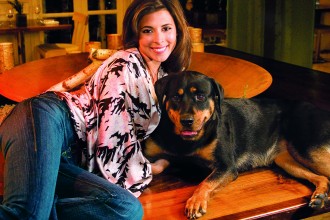 Jamie Lynn Sigler exploded onto the screen as Meadow Soprano on HBO’s runaway smash, The Sopranos. Her portrayal of the sassy and troubled Mafia daughter has catapulted Jamie Lynn Sigler into the spotlight. Sigler received the 1999 and 2000 Hollywood Reporter Young Star Award for Best Young Actress in a Dramatic Television Series and both 2001 and 2002 ALMA nominations for her work on the show. She also has a SAG Award for The Sopranos Best Ensemble Cast. Contrary to her on-screen image, this native New Yorker is not Italian, but a perfect mix of Cuban, Jewish-American, and Greek. Bada-bing!

Born with a passion to perform, this fresh-faced starlet has been acting and singing since the age of seven. She got her start in New York regional theater and has starred in over two-dozen theatrical productions including Annie, The Wizard of Oz,

The Sound of Music, The Wiz, and Gypsy. She made her Broadway debut starring as Belle in Disney’s production of Beauty and the Beast in October of 2002 through February 2003. Sigler also published her revealing autobiography, Wise Girl, to rave reviews. On the small screen, her portrayal of former Hollywood Madam Heidi Fleiss in the USA Network’s two-hour original movie, Call Me: The Rise and Fall of Heidi Fleiss, received popular acclaim. Despite her acting success, Jamie Lynn Sigler never gave up her intention to record an album. Her first album, titled Here to Heaven, was released in October 2001. MTV premiered the video for her song “Cry Baby” on Total Request Live. As for upcoming features, fans can catch this dark-haired beauty in I Remember, It’s Under My Skin and Dark Ride.

Animal Fair sat down with Jamie Lynn Sigler at the Chelsea hot spot, Aspen, a sexy ski lounge with a contemporary twist. Read on as she dishes about her rescued Rottweiler Hailey and what type of man she’s looking for in the new year!

AF: Hailey is adorable. How did she become a part of your family?

JLS: I’m a huge animal lover. I adopted Hailey from a shelter two years ago. She’s a Rottweiler-Lab mix and very much a people dog. I bring her to work with me, everywhere. She’s social and brings me a lot of joy.

AF: Why did you decide to adopt instead of buying a dog?

JLS: I was very interested in rescuing. We got Hailey through The San Gabriel Humane Society. I went to a large animal expo at the Rose Bowl in Pasadena, California, and there were all these fantastic dogs up for adoption. Hailey had something special about her. She was just really sweet and friendly around the other dogs and had a truly beautiful face. People ask me all the time, ‘What breeder did you get her from?’ Hailey is just perfect and has inspired me to rescue from now on. It’s a wonderful feeling to give a homeless dog a chance. Unfortunately, some people have their fixed stereotypes about Rottweilers. It is very rare to come across a dog like Hailey with such a great personality that she actually changes the way people perceive

AF: Have Rottweilers always been your breed of choice?

JLS: Yes. They definitely have the strength and the ability to be domineering and aggressive dogs. Hailey is not. But, I also have the confidence that if a situation ever evolved where she had to protect me, she would. But her natural demeanor is really goofy and happy. I love big dogs. She is a lot of work but great fun as well.

AF: Do you believe dogs take on the personality of their owners?

JLS: I would have to say she is just like me! We get excited about things and are reactive to our surroundings. Our similar personality traits include being strong, grounded and we both can’t wait to have fun traveling and socializing with interesting people! At other times we can be the opposite, low-key and mellow.

AF: What is the funniest experience you’ve had on your travels with Hailey.

JLS: I took her to the Dominican Republic with me last summer, where I was shooting a movie. She learned to swim and we went to the beach all the time and splashed around in the water. It was a blast! My only issue was that she liked jumping on people because she is so friendly, and ended up soaking some people! Now naturally, seeing a drenched and large Rottweiler leaping at you can be a little intimidating, but honestly she just wanted to have fun.

AF: Does Hailey enjoy being on the set of The Sopranos or does she want to whack, I mean, bark at everyone?

JLS: Hailey spends most of her time in the hair and make-up trailer, they make me leave her there when I’m shooting scenes. She loves everyone on set but Edie’s dog, Marley, who has been there since she was a puppy. Let’s just say they don’t get along well and it’s a good thing they don’t have guns. Marley sees Hailey as a big threat and the new dog trying to take over her territory. But everyone begs me to bring Hailey in all the time, because she’s such a good presence to have around.

AF: Now that you are newly single in your personal life, how has Hailey comforted you?

JLS: She’s been a great comfort. It’s a different responsibility having a ninety-pound Rottweiler in New York City by yourself, but it’s worth it. Plus, I never feel alone and always feel protected with Hailey while walking around with her – no one messes with us!

AF: If you could date any breed of man, what kind of breed would you choose?

JLS: I would want a German Shepherd man. They are very loyal, intelligent and all about family. Those same things are important to me. Besides, German Shepherds aren’t bad to look at and physically strong. I think I would like that.

AF: Do you have any exciting upcoming projects on your plate?

JLS: I’m still working on The Sopranos for the next couple of months and after a short break we turn around and come back for the last season. I am looking forward to the time off and taking long dog walks with Hailey!