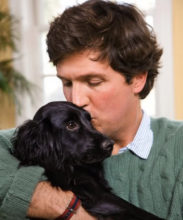 Tucker Carlson hosts MSNBC’s news debate show, The Situation with Tucker Carlson. Fans may also recognize him from CNN’s fast-paced political debate show, Crossfire or from Tucker Carlson: Unfiltered on PBS. When he isn’t busy with interviewing politicians, Carlson is lending his pen to Esquire magazine. He completed his last book Politicians, Partisans, and Parasites: My adventures in Cable News in 2003. You can catch Carlson doing the political two step on Dancing with the Stars! Animal Fair took a moment to chat with this busy newsman.

AF: You have a house full of animals. Tell us a bit about your gorgeous pets.

TC: We have a 13-year-old Golden Retriever named Agnes. She is completely deaf and is very heavy-set. We also have a 12-year-old Cocker Spaniel named Masey. She has been totally blind for 6 years now. We have a 4-year-old Maine Coon cat named Betsy. She is just a great animal! She is a ferocious killer. She has been the cause of many unfortunate deaths. And then finally we have a guinea pig named Sarah.

AF: Do your pets have any quirky personality traits?

TC: Oh yeah, our Cocker Spaniel, Masey, has hated children for many years. It’s been unfortunate for us since we have four of them.

AF: Are your pets spoiled?

TC: Oh my god, yes. Have you read the book The Dog Whisperer? Well it basically says how bad it is to spoil your pets. I mean both our dogs eat at the table. The cat actually sits on top of the table and eats. It’s kind of a Darwinian scene at our table at meals. The kids are eating and the animals are sitting there waiting to pounce.

AF: You have your own show, The Situation with Tucker Carlson. What do you like most about what you do?

TC: I love working with smart, interesting people. Also everything is always changing in the television industry. That’s the appeal. I guess it wouldn’t be good if you needed stability.

AF: What’s on your plate for the future? Anything new and exciting?

TC: Yeah, I have a lot of things coming. I can’t talk about them though. All I can say is that it’s going to be a very good fall!