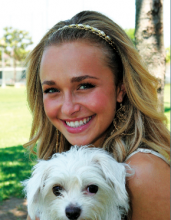 Animal Fair lounged around with Hayden Panettiere and her two dogs at La Cienego Park in Beverly Hills. Fans may recognize the spunky up and comer from Remember the Titans, Ice Princess and Racing Stripes. Keep your eyes open for her highly anticipated NBC show, Heroes, which debuts in September.

AF: Tell us about your dogs.

HP: Penny Lane is a Chocolate Lab-Water Spaniel mix and Madison is a Terrier mix. They are both rescues and are pretty hyper. They like their bones and just want to run around and have fun.

AF: How did they become part of your family?

HP: I got Penny Lane for Christmas. I always wanted a dog and so I begged and we finally got one. Now we have two! I also have cats at home, Jam and Rolley.

AF: Wow! You’ve got quite a few friends running around!

HP: I know. I’m allergic to cats too, but I love them so much. I suffer through it. Rolley is a big fat cat with so much hair, he doesn’t know what to do with himself. I just want to hug him all the time and I sit there and sneeze for hours afterwards. The cats sleep all day, so I have more fun with the dogs because they run, jump and play.

AF: Tell me about their quirky personality traits.

HP: Penny Lane is like a dog with ADD, I swear. Constantly running around, constantly jumping. She’s a very happy dog. She always wants to run off and do her own thing. She walks me, she’s that strong. Madison sort of weaves in and out of your feet and barks at anything that breathes. [Madison’s] not a big fan of guys, but Penny Lane loves everybody.

AF: Do you believe there is such a thing as puppy love with a person?

AF: What breed of dog is your boyfriend?

AF: Tell us about the new show that you are working on.

HP: It’s an NBC show, called Heroes. It’s a story about the evolution of mankind. People all over the world discover that they have these abilities. My character, Claire Bennet, is a high school cheerleader who has the ability to heal herself. I love it! We have a great cast.