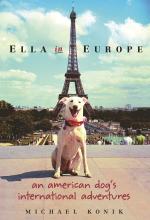 Traveling to Europe can be an adventure all on its own, so imagine what an event it must be with your canine best friend in tow! In Michael Konik’s latest book, Ella in Europe, he chronicles his adventures with his faithful companion; a ten-year-old white Lab and greyhound mix named Ella, as they travel Europe. Ella’s charm and gumption teaches Konik how to have fun while roaming the continent.  She made him beam with pride as she manages to swim in two ancient Roman fountains in one day. Ella only narrowly escaped an angry policeman while frolicking in the Fontana di Trevi. However, her romp through the fountain at the Piazza Navona helped Ella reach deserved celebrity status in Rome with a stint on the evening news. Who could blame Ella? The news story was on the hot and steamy weather in Rome and Ella was just looking for a little relief.

Something important to keep in mind when considering any travels with your four-legged friends is the weather factor.  Poor Konik and Ella learned the hard way. The hot July sun baked the streets they explored, making those without shoes very uncomfortable. While taking in the sights at the Colosseum, Ella’s nails were broken and splintered right down to the nub from the scorching pavement. Konik realized Ella needed to get out of the heat and tried to hail a taxi. This led to the next problem for dogs in Rome: the taxi drivers. Konik had a very difficult time finding someone who was willing to give them a ride back to the hotel, which was upsetting and frustrating since Ella couldn’t walk, and Konik couldn’t carry her.

Other than the painful pavement and the taxi drivers, both Konik and Ella found the city to be a rather dog friendly environment. In fact, Ella was able to enjoy every restaurant with Konik and they even shared a bowl of linguini! Ella’s adventures make for an entertaining and insightful read.

“It’s a hot day, and, truth be told, I didn’t exactly discourage her from investigating the liquid landmark. But, I swear, Ella seems somehow drawn, as if by International Movie Star magazines, to the famous splashing water (and the fortune in coins contained therein). There’s an enormous crowd around the Trevi—which is normal for a summer day—and a buzz of excited shouting passes through the crowd. I note an abundance of finger-pointing and camera-aiming, the kind of animated gesturing that typically accompanies the arrival of a celebrity at her movie opening. Ella, like one of the actresses she is unconsciously emulating, pretends not to notice the commotion she’s caused. (She’s too busy taking bites of water as she cavorts in the spray.) Were I a highly paid Hollywood flack, I would stand aside and watch the spectacle unfold, content with another job well done: There’s my client in the eye of the media storm.”

Excerpted from Ella in Europe by Michael Konik Copyright

© 2005 by Michael Konik. Excerpted by permission of Delacorte Press, a division of Random House, Inc. All rights reserved.

No part of this excerpt may be reproduced or reprinted without permission in writing from the publisher.