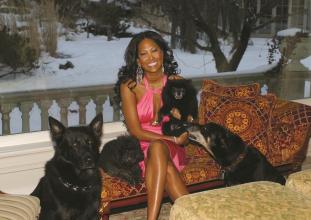 It’s amazing that Kimora Lee Simmons has found the time and compassion to rescue and care for her “Baby Pets”, including five dogs, three cats, hermit crabs, birds and fish! She shares her palatial estate with her bevy of animals, husband hip-hop mogul Russell Simmons, and their two daughters. When she’s not attending to her busy household, she’s hard-working as the creative director for one of the top women’s hip-hop clothing lines called BabyPhat, an offshoot of her husband’s successful men’s clothing line Phat Farm. No doubt Kimora Lee’s three cats were the inspiration for her company’s slinky feline logo! She is the obvious choice to head a dynamic women’s fashion line, since she was the muse to the house of Channel and its designer Karl Lagerfeld at the young age of thirteen-years-old. Kimora Lee went on to become a top model, hip-hop socialite and currently is a leading contemporary designer.

Kimora Lee Simmons has embarked on yet another major enterprise, a jewelry collection called Diamond Diva that consists of over seventy-five theme pieces, some with fresh names such as; “Phabulous,” “Grand Entrance,” and “Paparazzi”. Can a “Baby Pets” clothing and accessory line for pets be far behind?

AF: What type of animals do you have?

KL: I love animals! We have everything from dogs to cats, birds to hermit crabs and fish. I have three cats; Manu, Midnight and Miyake, and five dogs; Zoe, Beluga, Hollis, Mickey and Andee.

AF: Did you rescue your animals or did they find you?

KL: Both. I have rescued some of my pets, have received some as gifts, and even found some in

AF: Do you travel with your animals?

KL: My smallest dogs, Zoe my Pomeranian, and Beluga my miniature Poodle, travel with me everywhere. They are the most behaved and the most fabulous of the bunch.

AF: Where have you traveled with your animals?

KL: Everywhere! I don’t travel to particular vacation spots if my animals are not permitted to come with me. Zoe has been with me the longest, so I have been carrying her around the world since I was modeling in Paris.

AF: You have a cameo in the movie Beauty Shop –

did your pets travel to the movie set with you?

KL: I had a lot of fun playing a salon customer and definitely have plans to do more movies. My

family travels with me all the time. They all came out to LA where we filmed and spent time on the

set … the kids, Ming Lee and Akoi and my babies Zoe and Beluga.

AF: Word has it that your husband, music mogul Russell Simmons, bid on and won some of the most expensive luggage ever bought from the Camelot Sotheby’s collection as a gift for you?

KL: Yes, it was very sweet. For Valentine’s Day, Russell bought me a few of Jackie O’s Louis Vuitton pieces … a suitcase and vintage hat box. They were a part of the Camelot collection auction at Sotheby’s.  Jackie is such a style icon and I love Louis Vuitton. I think I have almost every Louis Vuitton piece that was ever made and some specially designed ones just for me!

AF: Now that your new clothing line Baby Phat is

such a success, is there a future “Baby Pets” line

KL: We have thought about creating some lifestyle pieces for animals. It’s definitely possible you will be buying your dog a Sterling Silver Baby Phat doggie dish somewhere in the near future.

AF: Since you have so many pets – do they all get along together?

KL: All the animals get along great! I keep an eye on the dogs when they’re keeping an eye on the cats, but other than that everyone in one big happy family!

AF: How do your children and pets

KL: The kids love the animals and vice versa.  My household and family would be incomplete without the