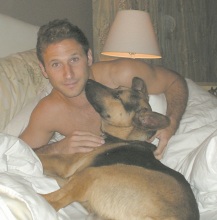 Actor Mark Feuerstein called from his trailer on the set of West Wing right off the trail of finishing the screen version of In Her Shoes. In this film, staring Cameron Diaz, Mark has a love affair with Toni Collette who leaves her law practice to become a dog walker.  Ironic since his next big project is pitching a new show called Hollywood Dog Park.   This brilliant idea was born when Mark and his fiancé, Dana Klein who was a writer on Friends, would lay in bed at night creating characters and voices for their dogs, imagining what they would sound like.  He discovered his German Sheppard Harry is a gay Latino fashionista who had something judgmental to say about everything in the house.  His Sheppard mix Hinder is more of a soulful jazz singer, a poor man’s Louis Armstrong if you will.   Mark and Dana wondered what it would be like to hear what Tinkerbell, Paris Hilton’s dog, had to say about following Paris around until one afternoon waiting at a carwash where Mark saw a version of that book already written.  He knew that we have all pondered what our dogs would say if they could talk.  So he collected a bunch of actors who adore their pets.  These pets not only live the celebrity lifestyle their owners are even willing to share the spotlight with their beloved pooch.   Hollywood Dog Park is a new breed of show, part reality and part narrative.  It is where celebrities and dogs can mingle and get to know one another; each four-legged friend will have their own character and edgy voice.  We’ve all seen a lot of celebrities talk about what they think of their beloved pups, now we get a chance to see what the dogs think of their celebrities.