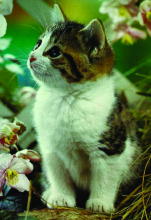 Though it is 2005 and we are still stuck on earth driving cars for everyday transportation rather than zipping through the depths of the galaxy in complex tele-transporters, there is no denying the fact that technology has taken strides as wide as a bald eagle’s wingspan. Genetic engineering produced heartier crops and enabled animal cloning, but ALLERCA Inc. has taken this technology to the next plane by expanding its line of products that enhance the pet ownership experience and undertaking a string of cell-based animal projects.  Altering immunity genes, ALLERCA strives to generate disease-resistant animals with hopes that future creatures will have the ability to ward off common animal-attacking illnesses.  The ALLERCA Foundation also collects DNA from endangered species in an effort to create diverse populations to reintroduce into the wild. ALLERCA is now endeavoring to extend the probe of bioengineering into pet territory.  By manipulating the composition of allergy-stimulating genes in felines, the irritating chemicals emitted from cat saliva and skin are no longer expected to spur on allergic reactions in humans.  The magic behind the phenomenon of non-allergy-inciting cats is attributable to RNA interference and is expected to spawn the first wave of genetically engineered cats in 2007.  Foreseeing the sale of 200,000 cats per year, ALLERCA is planning to charge $3,500 for each genetically engineered product. “Though there are a number of allergens present in cats, the main one is produced by a single gene,” explains ALLERCA president Simon Brodie, and this is the one that they target.  The company is not planning to create dogs in the same manner, as canines contain more allergens and therefore present a complicated puzzle.  Also, “Fewer people are allergic to dogs,” Brodie claims. While ALLERCA’s medley of tasks is commendable in many respects, the pursuit of fashioning genetically engineered pets wavers on a controversial quagmire.  However, as Brodie confidently mentions, “There is every indication that the genetically engineered cats and their offspring will be safe and healthy.” When asked about the anticipated effect of genetically altered cats on populations struggling in shelters, Simon explained that the price and limited production of ALLERCA cats make it unlikely that swarms of people will rush to purchase them and abandon local shelters.  If anything, the number of cats in shelters should decrease, as concerned owners can take proper precautions before purchasing their pets and avoid the pattern of having to immediately put it up for adoption after discovering their allergic reactions. ALLERCA has also developed GeneSentinel, a technology that can perform a broad scope of DNA scans, identifying numerous canine and feline viruses, bacteria, and parasites through a single saliva sample.  The quickness, accuracy, and cheapness of this test makes it a viable option for pet owners and veterinarians alike.  GeneSentinel-approved veterinarians can even dispatch instant warnings of disease outbreaks after gathering results from across the country.  GeneSentinel’s sensitivity allows it to save the lives of ill companion animals, making it revolutionary and placing it right up to par with ALLERCA’s other genetic technologies.   Contact Info: Simon Brodie ALLERCA, Inc. 619.819.7517 simon.brodie@allerca.com