Having fallen in love with the film’s script right off the bat, Hewitt immediately accepted the role. “John Davis, who produced Heartbreakers, gave me the script.  I loved it,” she said. “We filmed for two months.  I loved Breckin [Breckin Meyer, Jennifer’s co-star]. It was a blast!”

Perhaps Hewitt’s love for cats prompted her to take the role.  Her fancy for felines began during childhood and she says it is still an enormous part of her life. “I love cats,” said Hewitt. “I used to have a bunch. Now I have one very cute dog. I have always had pets,” she added. In the movie, Hewitt works with real-life twin dogs, Chloe and Tyler, who play Garfield’s play pal, Odie. 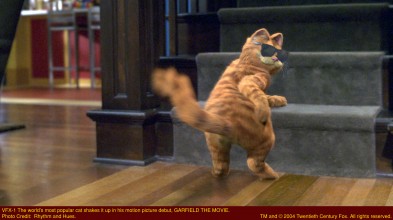 The Waco, Texas native has been singing and dancing her way to Hollywood ever since she could walk and talk. Having nailed a coveted spot on KIDS Incorporated, a widely viewed kids’ entertainment television show in the 80’s, Hewitt was on her way to stardom.

At the age of 16, she landed the part of “Sarah” on Fox’s Party of Five, where she played opposite actress Neve Campbell and actor Scott Wolf in a series about five siblings who lost their parents to a terrible accident and were forced to work together in order to survive. The show was a success and lasted for six seasons, ending in 2000.  Jennifer Love Hewitt’s career blossomed on the big screen in films such as I Know What You Did Last Summer, Heartbreakers, Can’t Hardly Wait and The Audrey Hepburn Story, among many others. Rounding out her multi-faceted career, Hewitt is also a three-time recording artist; her most recent CD is titled Bare Naked.

Recently, Hewitt organized a fundraiser to help the victim’s of Lake Arrowhead, California’s wildfires. Her generosity and collaborative efforts with television’s The Wayne Brady Show helped this victim’s relief fund raise over $40,000. Currently working on a new romantic comedy in London, Hewitt’s own little pooch named Mia went along for the trip! Love noted to pet seekers around the world, “I would recommend any type of pet to someone. They add so much to your life.”

You can see Jennifer Love Hewitt as America’s sweetest vet in Garfield the Movie, set to be released in theatres everywhere this summer.