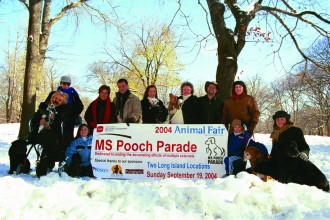 An assistance dog is often visualized as a large, powerful Labrador or Golden Retriever in a harness, providing physical support and guidance for its human. But for Millie Cinquemano, who was diagnosed with multiple sclerosis several years ago, her Jack Russell Terrier, Sport, provides an even greater service – emotional support. Though not trained to cock his head and listen attentively when Millie’s symptoms have her frustrated or in pain, Sport knows just what to do when she needs an extra hand.

“Just the other day I had a mild episode,” says Millie, who uses a rolling walker to get around. “I was transporting a mug of hot coffee on the shelf of my walker, and I went down. The cup hit the wall and shattered. Coffee flew everywhere, burning my arm and thigh. My legs are atrophied, so I could barely move, and just my luck, the phone also flew out of the basket and landed just out of reach.”

“Sport stood at attention,” she continues, explaining how she inched across the floor to reach the phone. “He looked up at me and I could sense he was thinking “I wish I could pick you up.” After she called 911, Millie rested on the floor with Sport on her lap. “He started to lick the burned area as we waited for the police. He was so comforting.”

For Millie and many of the 400,000 Americans affected by MS, animals make all the difference. Most people with MS are diagnosed between the ages of 20 and 40, with women affected twice as often as men. Because MS is a chronic, often disabling disease of the central nervous system with symptoms such as numbness in the limbs, paralysis, or loss of vision, trained service dogs can often be utilized to improve mobility and accessibility.

But researchers and MS advocates recognize the overall value of caring for an animal.  “When people are isolated,” says Susan Weber, Certified Social Worker for the National Multiple Sclerosis Society, Long Island Chapter, “animals provide companionship. They bring lots of fun to life, and people don’t feel so alone.”

In addition to the vital roles they play in the personal lives of people with multiple sclerosis, New York’s top dogs can do even more to help. On Sunday, September 19, the National Multiple Sclerosis Society’s Long Island Chapter will offer its annual Animal Fair MS Pooch Parade at two Long Island locations, including Wantagh State Park and the Hamptons. Animal Fair publisher Wendy Diamond and her adorable Maltese Lucky Diamond will be honorary chairs of the festivities, which will include:

One and two mile routes

Canine service dog demonstrations by our

four-legged heroes and their handlers

Celebrity pet photographer Jim Dratfield of Petography will exhibit his work at the Southampton location, including his photographs of three National MS Society clients with their pets.

The Pooch Parade began in 1996 when the Long Island Chapter of the National Multiple Sclerosis Society learned that MS Walk participants wanted an event where they could walk with their beloved pets to help benefit the Chapter’s work.

“The Pooch Parade promotes fitness and fun among families, friends, and four-legged fundraisers,” says Pamela Mastrota, Long Island Chapter President. “Participants collect flat donations from friends and family to help end the devastating effects of multiple sclerosis. All money raised supports important MS research, as well as more than 60 programs and services for Long Islanders with MS and their friends and families. It’s just a great day for us, for the dogs, and for their owners.”

Each Pooch Parade route is completely supported with staff, volunteers and rest stops. Routes are designed so that everybody can enjoy them, regardless of their level of physical ability.  Snacks and entertainment are provided at each finish line.