Actress, singer, and dog lover Vanessa Williams remains at the top of her game – on Broadway, television and on the big screen. The former Miss America tells Animal Fair that at least one of her three dogs has enough flair to sing along when she’s practicing her vocals at home!

Vanessa just released her latest album, which is set to appease her fans in no time.  20th Century Masters- The Millennium Collection: The Best of Vanessa Williams (Mercury) hosts her talents, and the apparent ease with which she alternates between the stage and the studio, having allowed her to make one of the greatest comebacks in showbiz. 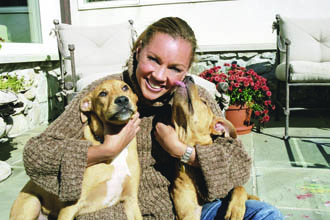 Vanessa will be seen returning to the big screen this year in a new film alongside Cedric the Entertainer, Johnson Family Vacation.  It is a comedy full of hilarious mishaps, as the Johnsons travel to a family reunion in Missouri.

As a testament to her talents as both a singer and an actress, she has performed in two Broadway productions, Kiss of the Spiderwoman and Into the Woods, where her work in the latter earned her a Tony Award nomination.  Vanessa has acted alongside Hollywood icons in major film productions, such as Arnold Schwarzenegger in Eraser (1996) and Samuel Jackson in Shaft (2000) to name two.

When she’s not busy working, Vanessa can be found at home with her four children, husband Los Angeles Laker star Rick Fox, and three dogs, Sebastian, Cayman, and Congo.

Sebastian is a ten-year old Shih Tzu, who has “had almost nine lives,” says Williams.  “He’s been hit twice, he’s almost had his head knocked off… he’s a ferocious little guy who loves to chase tires and trucks, and leap off my stone wall in front of a UPS truck to try to stop it.”

Cayman and Congo are the two newest doggie additions to the family, whom Vanessa adopted from “Broadway Barks,” an event that aims to adopt out homeless pets living in various shelters across the city, and to educate people on proper pet ownership.  From the moment she saw them, it was love at first sight.

“I want them to be a part of the family and part of the kids’ experience, and they love it.  It’s like an extended family.  It expands your family.  It allows children to learn respect in terms of animals.”  Unfortunately, however, Sebastian is not nearly as enthusiastic about Cayman and Congo.  According to Vanessa, he “couldn’t stand the puppies he basically still barks at them when they get to close, and ignores them overall.”

Don’t think for a second that musical talent has failed to rub off on Williams’ pets.  With music teachers for parents, two children who play instruments, and Vanessa’s own brilliant voice, it seems inevitable that at least one of the family pets would develop some degree of musical talent.  Says Vanessa, “Well, Sebastian loves to sing along.  He’s a howler I can get him to sing easily.”  If you are wondering whether Cayman and Congo have shown any signs of musical talent, the answer is “Not yet.”