Celebrity dog trainer April Morley has been doing wonders for the animals in show business since 1979. Having worked on film-sets including Intolerable Cruelty, The Nutty Professor, and Beethoven, Morley has done everything she can in order to make her acts…well, act! Morley shares with us her work and the importance of safe travels with the animals she works with.

More recently, she is to thank for her extravagant work on the hit feature film Bruce Almighty. The blockbuster, which stars actors Jim Carrey and Jennifer Aniston, features an adorable Dalmatian named Sam. Played by real-life canine star Buster the Dog, Sam was Morley’s four-month project during the filming of Bruce Almighty.

While scouting for the part of Sam in a California puppy pound, Morley found Buster and knew immediately that he had the potential to make it big.

“I found Buster at a time when I was desperate to fill the part. We had already been through twenty-five different dogs that hadn’t worked out and I when I walked past Buster, I noticed his eyes following me. I knew immediately that his attention and focus was there and his look was perfect,” said Morley. “I took him home right away and began to work with him. After just three days, he was already learning.”

Buster was a quick study, learning behaviors like “sit” and “stay” within eight weeks. Within another five or six weeks, he learned the basics needed for his role as Sam, including the famous scene of  Buster sitting on the toilet, lifting the lid and even flushing! 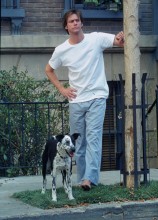 “He did it all. None of the tricks you see in the film are computerized, he even sat on the toilet with his legs around the newspaper,” assured Morley.

The actors too had to learn to work with Buster. They took direction from Morley on how she needed them to react to the dog.

“It would be too confusing for Jim or Jennifer to tell him what to do, since he had to do it all on cue and the hardest part for the actors was to ignore the fact that he was there, but still react to him,” Morley said.

In terms of travel, Buster and Morley had to quickly adjust to moving from location to location, but both the film’s director and the animal training company for which Morley works, Animal Action, always made sure he was properly accommodated. All of the animals that work with Morley travel in crates. “Crates,” she explained, “give them their own little getaway where they can feel safe.”

“Production always provided a trailer for Buster so that I always had a place to let him relax, where he could get away from all the stimulus of the set. It is absolutely essential that he gets time away from being distracted since everybody wants to play with him and pet him. I just can’t have him doing that all day,” said Morley.

Buster and Morley had a lot of work to do each day on the set of Bruce Almighty, although it was a pleasure she says to work with him. Currently, Buster lives with Morley and continues his training for upcoming events and projects supervised and managed by Animal Action, located in Sun Valley, California, where the focus is training animals for media appearances.