I first met Francisco Schklowsky at a book party at the Metropolitan Museum of Art.  Schklowsky was at first very quiet and unassuming. He looked like a cross between a musketeer and a raggamuffin. A bit like Salvador Dali I thought, but with akind, gentle twinkle in his eye. He greatly appreciated the glass of white wine I handed him at our initial meeting. I soon discovered that he was a French street photographer. A somewhat mystical character with a sweet disposition eager to share his fantastic stories of life on the road as a stranger in strange, wonderful new lands often with only a camera and the animals he meets to keep him company.

After I introduced Schklowsky to my beautiful French Canadian friend Valerie, he immediately became animated. They conversed enthusiastically in their native tongue like old friends. He started taking a few snapshots of her without a flash. I assumed that he had fallen in love, like everyone does when they meet Valerie.

Her adorable French accent, exotic Amerasian countenance and huge baby doll eyes undoubtedly caught his attention. When I asked him his impression of Valerie a few weeks later, he commented, “Her oval shaped face would capture the sunlight beautifully.” Not the most romantic of perspectives. As I have come to know Schklowsky a little bit better, I never know what to expect.

“You have to stand in a Parisian alleyway for 48 hours straight if you really want to see something interesting” Schklowsky once im-parted to me with an impish smile. Schklowsky describes himself as a Bohemian. A Jack Kerouac with a camera who feels connected with all sentient beings. He has traveled across the world on a bike and on foot…and has made friends with animals all over the world. He feeds them. He talks to them. And many times they let him take their picture. From India to France to New York City, Francisco has traveled the world waiting for something really interesting to unfold in front of his camera.

Here are just a handful of such moments from a lifetime of his remarkable work. 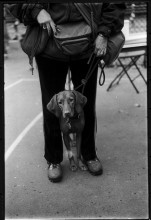 I am on a street in Calcutta. Just bought my ticket and I’m sitting on my knapsack. I stood on the train the whole way over here.  All of a sudden like a dream…the first rickshaw I’ve ever seen.

I was so tired I didn’t even remember taking this photo. The mystery to me is these two beautiful street dogs. Where did they come from? Where

are they going? In the rickshaw is a young man heading off to school. He seems to be looking

forward to it. The rickshaw runners come from the next state over-West Bihar. In Calcutta, running a rickshaw holds a high degree of status. In a country overrun with poverty, rickshaw runners are considered very successful businessmen by other Biharis. The residents while very poor all work very hard just to survive. They live in a pure state of poverty, but not misery. They are proud people.

Shot from the window of my old apartment. The top cat knows me because I throw him the heads of fish. I don’t eat the heads of fish, but I have some good friends that do. Joining him, another visitor. I had no right to take a bad picture because they were both posing for me. There’s an angel on the wall of that building over there if you look close enough. It’s a hidden image

occurring naturally. Such is the magic of the city of lights. The building has been standing in that same spot since 1723. We’re in a suburb of Paris. It’s a nice summer day. An attractive young Parisian woman just moved in next door with a new cat. This is the only time I ever saw both cats together. My old friend looks like a sphinx on the chimney. Every sunset he sits there like a Buddha in the shape of a cat. I’m glad he made a new friend. 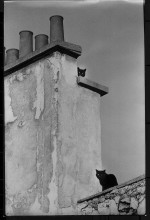 A friend invited me to watch the taping of a jingle for a popular Saturday afternoon French TV show called Telezebra. After a long morning of posing for the cameras, the producers were surprised when the exquisite star—looking elegant in stripes suddenly and quite dramatically decided to stretch out and scratch her back. Zebras can’t scratch their backs like we do, but they have other advantages. 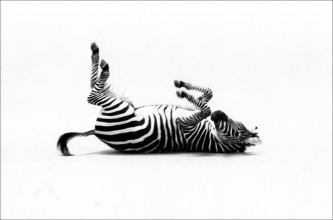 A desert town at night. Anyone who has ever traveled across a desert knows that it can get pretty cold after the sun goes down. Here, on the side of the road, some homeless puppies know instinctively the best way to keep warm underneath the stars. 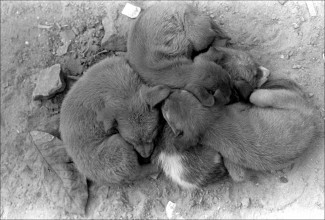 An exceptional day in Paris. A snowy day. I bought a big loaf of bread. I shared the whole bread among these snow-white seagulls. They were all quite beautiful. To thank me—they flew close.

A yard away. Feeling at ease. The bread excited them. They flew circles around me. When you please an animal with their stomach, they bring you closer to their heart. Animals are more grateful than people. I had the honor of showing some of my photographs at a couple of exhibits at the Luxembourg Gardens, right next to the Louvre (1979 & 2001). The gardens were built by French monks over 400 years ago for the pleasure of the wife of King Henry the Fourth—Marie de Medicis. She would spend hour upon hour in the gardens because they were so lovely. They still are. 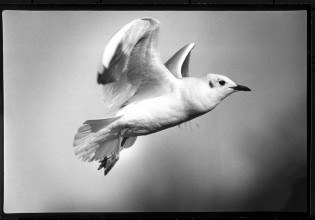 A country horse. On farmland located on a mile high plateau that looks down on Paris proper. Way above the city these saddle horses roam free and live a life of leisure. They prefer to sleep in a nearby forest. On this morning there was a slight drizzle. An unusual mist that has wet his “dress”…

(a French word) or beautiful grey coat. I had some honeybread with me and he took a big chunk. That is, after he had gently moved away some of the other horses. I had the impression that he would have gladly let me climb on his back but I didn’t want to take the chance. I didn’t want my new friend to run away. After introducing myself, I took this picture and then bid my new friend “Pain d’epices” (honey cake) a fond adieu, After all, I had miles to go before I would sleep. 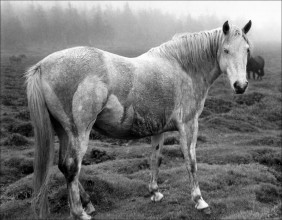 They have a way of opening eyes in India. They are a very curious people. Dark eyes full of wonder. I’m here in a very famous town, Shantiniketan—It’s known to the locals as “The House of Peace.” It was the former home of one of India’s most famous poets-a Bengali named Rabindranath Tagore. He won the Nobel Prize for poetry in 1912. He bought the land where I’m walking and built a University here. There is only one requirement to study at the University for free- Students must respect and live in harmony with all people from different cultures. People here live as brothers. They depend on their cows only for milk. Cow dung is also used for fuel. I discovered that these sacred cows not only see very well peripherally but they see much more than we think. 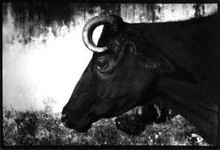