The MTV funnyman gets personal about life, his new show and his pair of Siberian Husky pups – one truly inspirational man 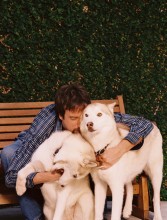 If you’re wondering whether or not there exists a sweet side to comedy, the answer is yes, and it lies in actor and comedian Tom Green.

The Canadian comic shared how he treasures the companionship of two very friendly pooches – one of whom Tom aptly describes as “white,” share Green’s home in Beverly Hills, California where the trio spends endless amounts of time together.

Tom told of a day about a year back when he was driving down a nearby highway and saw Annie in a cage with other dogs up for adoption. He didn’t hesitate for a minute and he pulled over and began filling out the paperwork to bring her home!

Growing up as a child, Green shared that he never had dogs, although he did find a box full of kittens when he was 15 years old near his parents’ home. “I gave one of the kittens to my girlfriend at the time, but she wasn’t allowed to keep it. So I looked after it and my parents still have that cat today,” said Green.

Currently, Green is working a back-to-back filming schedule for his new show on MTV titled, “The New Tom Green Show.” Having filmed 11 straight weeks of daily shows, Tom noted that he’s not only a bit tired, but that spending time with the dogs helps him to relax and regain energy.

When asked if the pups share in his routine Hollywood image, Green shared the importance of keeping his dogs healthy and mindful. “I want them to be down-to-earth dogs,” he said, “I try and keep them away from all that.” He noted that it has become routine to take the young pups, Annie, who is about one year old and Steve, nearly two, to the Canyon near his house for daily walks as well.

Now airing on MTV weekdays at midnight, ‘The New Tom Green Show’ is very different from the original, which had its debut on the Comedy Network in December of 1998. The new show invites three guests to take the stage and be individually interviewed by Green himself.

“It’s completely different in a lot of ways. Sure there are things you can look at cosmetically speaking that are the same– such as I’m still sitting at desk. But, this show is driven by a lot guests.  I’m not trying to make fun of anybody and we do a lot of silly stuff on the show,” he explained. Green’s recent favorite episode was with hosted guest musician Run D Emcee.  “Sometimes we will have guests participate or I will do a song with them. I had Run D Emcee on and did [the song] ‘It’s Tricky’ with them, which was very fun,” he said.

Green agrees that dogs give so much to people in terms of inspirational love and laughter, and shared how certain hardships he endured have made himself an inspirational role model too. In 1999, Green made the choice to have his diagnosis of testicular cancer made public, as well as to have his surgery and time spent in the hospital aired on national television. “At first I wasn’t even going to tell MTV [about the diagnosis],” said Green. “It was a difficult decision.”

Shortly after the first surgery, they had to remove my lymph nodes, putting me in bed for two months, so I had to stop my show. The decision to put it [the surgery] on TV was therapeutic in a way.  I figured this will at least take my mind off it. Even though it certainly wasn’t the most fun thing we have ever filmed, I felt it would help distract me from the reality that I was sick. I was actually surprised when after the first day of filming in the hospital, doctors were coming up to me and shaking my hand and thanking me,” Green added.

Green’s television experience with his illness prompted letters from fans across the world – many of whom owe their own discovery and survival of similar types of cancer to him. “I have received letters from young men who had been diagnosed and parents of kids who said the show saved their lives,” said Green.

Although he did not own any pets during the time when he was sick, Green noted that living alone now presents the need and love of having the companionship of Annie and Steve.  He even shared that they help with yard-work around the house!

Currently, Green is continuing to work diligently on his talk show and plans to do so for a while.  Fans note: a trip to Scotland will film an off-site episode soon to air on MTV in upcoming months.

A lifelong skateboard fan, Green shared that his newest interest can be found in his predecessors. He spends hours watching old talk shows. After being inspired by a producer of his show and noted that he has been watching old TV shows from the 60s – Steve Allen and Johnny Carson to name two, while spending much time at the Museum of Television on Santa Monica Boulevard in Beverly Hills. “You can watch anything you can think of there,” said Green, “when we were getting ready for our new show, I was there 3 or 4 times a week for hours at a time, watching the mechanics of how these talk show masters would do what they do.”

A master at broadcast himself, Tom Green is now a master of many things, one surely being that of superb care for people – and animals.