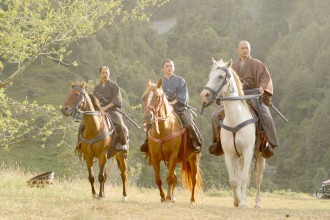 The movie The Last Samurai not only features the handsome and accomplished actor Tom Cruise, but it also stars fifty stunning and extremely talented equine actors. The Last Samurai is set in the 1870’s and follows the story of the ancient line of warriors, the Samurai and their struggle with the Emperor of Japan. Filmed in the Japanese town of Himeji, home of the Engyoj Temple and Monestary, high in the mountainside and surrounded by a forest of bamboo, there really couldn’t be a more majestic setting for such a powerful film.

Director/Writer/Producer Edward Zwick proudly states “None of the horses were injured – not a turned ankle, nothing. These were remarkable animals, so well trained and loved by everyone.” The fifty horses were purchased by a production company in New Zealand and were trained by an international team of instructors under Horse Master Peter White for four months prior to filming. They worked under the supervision of a full-time veterinarian and a representative from the local chapter of the American Humane Association, Film & Television Unit.

The animals had to be conditioned to production environments including scenes with sound effects such as explosions and gunfire. Several of the horses had to fall in battle and learn how to land in a way that would prevent injury. Zwick confirms, “Pits were dug in the mock battlefield, stuffed with padding, soft mulch and hay and covered over with grass so that when a horse dropped on cue it would have a nice soft bed to fall into.” The horses were categorized based on their individual ability and temperament. They were either classified as “actor’s horses, stunt horses or background horses,” defined White. The horses however, were not the only ones that needed training for the film. Only Tom Cruise and Tony Goldwyn were experienced equestrians out of the group and only about half a dozen actors that rode had some kind of riding experience. All actors had to adjust to riding in busy, noisy and crowded conditions. In two months time the actors learned how to “ride into Zwick’s battlefields with confidence,” White reflects.

At the end of filming the battle scenes, half the number of horses returned to their previous owners. The other half remained with local trainers who had served as their wranglers and developed a bond with the horses during production. Several others were sold to residents in New Plymouth that proved to be good homes for these skilled equine actors. How proud must those owners be, to boast; “My stallion was an animal actor in a monumental film staring Tom Cruise!”

Let yourself travel back in time and fall into a story of warriors, ancient empires, duty and honor in The Last Samurai, showing in theaters this winter.