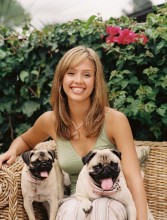 At just twenty years old, Jessica Alba is already an upcoming and rising television and movie star. She was born in Pomona, California. Her military family traveled several times across the country, from Mississippi to Texas, until finally returning and settling down in Southern California. Alba knew she wanted to be an actor at the mere age of five. Her agent signed her at twelve years old, only nine months after her first acting class. And the rest, as they say, is Hollywood history.

AF:   Did you have pets growing up?

Alba: Yes, I always had pets. Mostly dogs though, no cats. My parents have Sasha. She’s a Rottweiler. She’s lovely. And we have Moose, a Schnauzer. He’s like 15 years old. My mom also has a Shitzu named Sarah.

AF:  Do all the dogs celebrate the holidays?

Alba: Oh yeah, they run around like maniacs. They’re inside, running around. They do laps inside the house. It’s like The Grand Prix of animals.

AF:  Have you ever done anything special for the holidays with your two Pugs, Sid & Nancy?

Alba: Christmas is a big deal with Sid. I haven’t had a Christmas with Nancy, so this’ll be her first one. Sid was born on June 27th, so she’s a year and something. Nancy is ten months old, born in January.

AF:  Sid and Nancy, how did you get the names for your Pugs?

Alba: I was watching the film on The Filth and the Fury, a documentary about the Sex Pistols.  I was in a depressed mood filming in Canada, where it would rain for a hundred years, and I was so ready to go home. While watching the movie at the time it just made sense for me to name my dogs Sid and Nancy.

Alba’s debut movie was Camp Nowhere in 1993 and since then her career has skyrocketed. She’s an avid swimmer and PADI-certified. With her ongoing love of animals (and mammals), Alba was thrilled to work and play amongst dolphins in her role as Maya on the 1993 television show, Flipper.

AF:  Anything else that you’re doing that involves pets,

Alba: I’m doing this movie, Into The Blue, and the lead actor, Paul Walker, wants to bring and put his dog in the movie. And we’re playing scuba divers and his dog will act in a boat scene. And the director, John Stockwell, has a dog. And he always brings his dog down.

AF:  Do you think Sid and Nancy will get a part too?

Alba: No, I think they’ll just be in the hotel, on the set, running around like little maniacs.

landed the supernatural role as the genetically enhanced Max, on James Cameron’s Dark Angel. Her list of awards and nominations is quite impressive for such a young starlit. She won the coveted TV Guide Award for Breakout Star of the Year for Dark Angel (2000), Academy of Science Fiction, Fantasy & Horror Films for Dark Angel, USA, 2001 Saturn Award and Alma Awards 2001 Special Achievement Award, Breakthrough Actress of the Year. Her nominations have been many; including the prestigious 2001 Golden Globes, USA, Best Performance by an Actress in a TV-Series-Drama for Dark Angels (2000).

Presently, Alba rapped up shooting on a new Universal Pictures movie titled; Honey. She plays Honey Daniels, a dancer and choreographer working as a bartender and record store clerk until she gets her one big break. The movie has been compared to a modern day Flashdance, and will be released this year.

AF:  Were your dogs on the set of Dark Angel?

Alba: No, I didn’t have Sid and Nancy on Dark Angel. I had them on Honey. Whenever, I’m walking by a store, that’s a prime time for Sid to go take a big dump. So, that’s always a good one. Especially right in Beverly Hills. Right in front of Gucci or Louis Vuitton, right when people are praising her, she’ll decide that’s a great time to go to the bathroom. Or in the middle of the street in Beverly Hills, when we’re crossing, I have to drag her as it’s flying outta her bum.

AF:  If you were to date the man of your dreams, what kind of dog would he be? Would he be a Pug?

Alba: No, probably a mutt

AF:  What would you want to tell people about how much your pets mean to you?

Alba: They just love me. They just want to be hugged, loved and kissed. They’re great, as long as I give them attention. If I’m gone all day, they let me know it!

Besides Alba’s acting accolades, she recently signed a contract with L’Oreal, and as a Feria hair color spokesperson. She isn’t shy about her desire and strong will to succeed in the competitive world of acting. With her pugs, emerging talent, and time on her side, Animal Fair thinks Jessica Alba is definitely one actress to watch.