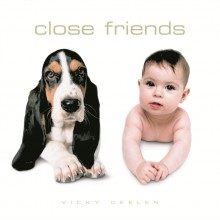 In Close Friends, photographer Vicky Ceelen wonderfully captures the sweetness, innocence, and whimsy of baby animals and baby humans with humor and tenderness.  Pairing pictures of animals with photos of adorable babies in strikingly similar poses, Ceelen’s delightful photographs perfectly capture the “kinship” that babies of all kinds share.  A babies first steps is compared to the awkward waddling of a young duck.  The satiated smile of a toddler is mirrored by that of a turtle. Interspersed among these

precious pictures are thoughts and quotations in the nature of friendship, which adds a particularly personal touch to a book that will be a pleasure to give or receive.

Vicky Ceelen was born in a small village near Antwerp, Belgium. All of her other siblings picked up the brush and became painters, but not Ceelen. Instead she worked as a model and became fascinated by being on the other side of the lens. In the early 1980’s she was an assistant on fashion photography at Pin-Up Studio, and later as a photographer for Charles of the Ritz, Elle and Vogue. Close Friends is her first book.  She currently enjoys living in the creatively inspiring city of Paris. – Renay Smith