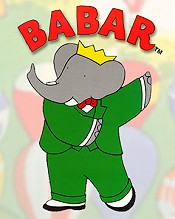 This past year, Cecile de Brunhoff passed away in Paris. She was 99. But Babar, the whimsical elephant she helped create, remains as lively today as the evening she gave him life, seven decades ago. Though her husband, jean, is better known as Babar’s creator, the Babar universe has been a uniquely collaborative effort; the product of a family, rather than a single vision. Cecile de Brunhoff invented the elephant one night as a bedtime story for her boys. The children, in turn, retold the tale of their father Jean. He embellished further, adding illustrations. Soon, the world had The Story of Babar. Before it was published, Cecile insisted her name be removed from the book. She thought her contribution was way too small to merit mention. Hardly.

Published to acclaim in 1931, the de Brunhoffs followed up with six more volumes, including the children’s classics; “The Travels of Babar” and “Babar the King.” Along the way, the elephant would marry his beloved Céleste and the Royal couple would have three children; Flora, Pom and Alexander (a fourth was added years later for a TV show). We also met vaguely pompous authoritarian figures characters Cornelius and Pompadour. And, lest we forget, Babar’s mischievous monkey pal Zéphir acting as the Id of the Babarian psychological landscape.

Sadly, Jean de Brunhoff’s last two books, “Babar at Home” and “Babar and Father Christmas,” were published posthumously. He died from tuberculosis at age 37. Today Jean de Brunhoff is considered the father of the modern children’s picture book. His work have sold millions and been translated into almost twenty-four languages. Artists like Ted Geisel and Maurice Sendak cite Babar as a seminal influence. Small wonder. The books are filled with movement and drama. They show life not as some pastel-colored world of dreamy contemplation, but a place of conflict and action: of chases, crashes and poisonous mushrooms. In Babar’s Celesteville, challenges are overcome through self-reliance. Successful lives are defined by honesty, courage and compassion. It was Laurent de Brunhoff’s decision to continue his father’s work that ensured Babar would become globally recognized. First, the younger de Brunhoff finished manuscripts left behind. Then he struck out his own, writing some thirty new Babar tales himself. Eventually, Laurent and his mother became architects of an animation empire, one that spanned books, films, television, and every imaginable permutation.

Those who want a taste of Jean and Cecile’s original genius now have a chance to do, albeit sugarcoated. Surprisingly, the Babar stories were first published with pages missing. The author’s versions had 48 but were cut to 30 for space consideration. A reissue from Random House, “Bonjour, Babar! The 6 Unabridged Classics by the Creator of Babar” includes every original page, so Babar fans can enjoy the literary equivalent of Director’s Cut. But this Director’s Cut has been clumsily colorized. The new editions have a flat, bright palate that blots out much of the original work’s subtlety and dynasium.

Ah wall, at least there is no shortage of new Barbarinalia. Laurent’s recent book, “Babar and the Succotash Bird” met critical acclaim and his “Babar’s Yoga for Elephants” was a New York Times bestseller.

Though saddened by the loss of his mother, Laurent show no sign of slowing down. This summer, Babar’s licensing company, Nelvana Limited, announced a program to put the famed pachyderm on everything from infant-wear to wallpaper, ensuring a whole new generation will “The World’s Most Popular Elephant”, Babar.

The, of course, there are the current Laurent children: Cecile de Brunhoff was survived by two sons besides Laurent, four grandchildren and four great-children. Whether any of them will take up the family business, only time will tell.