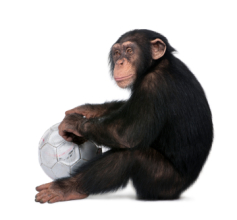 Move over Mr. Miyagi, there’s a new black in town. While other nosh on bananas, Clemens the chimp shows his roundhouse kicks and kung fu moves, all the while helping a teenage boy build his self-confidence and get the girl of his dreams.

Who said kung fu can’t come in hairy package? The Hairy Tale, due in theaters on May 16 proves it can! This suspenseful family film features an awkward high school boy who befriends an animal behaviorist and a lethally-limbed chimpanzee named Clemens (that includes opposable thumbs). With their help, the boy attempts to win over his classmates – in particular, a girl for whom he has fallen head over heels. Hoping to rebuild his nerdy image, the boy decides to learn football, which (as it happens) his two new friends can teach him. Meanwhile, worker at a local animal testing laboratory learn of Clemens’ rare abilities and vow to stop at nothing to exploit them.

In order to keep Clemens safe, the boy agrees to let the animal behaviorist and chimp stay in his family guest house, without the consent or knowledge of his mother.

The evil lab workers continue to be in close pursuit of the chimp and strangely enough, all eventually comes to rely on the outcome of a high school Homecoming football game. Fantastical – and fanciful, it’s an inspirational (albeit Hairy) tale of fitting in. Does he get the girl in the end? You’ll have to see the movie to find out, but we will say that there is no better way to get a girl’s attention than with a 200-pound chimp. The Hairy Tale, coming to theaters May 16th, stars Seth Adkins, Matthew Modine, and Roma Downey.